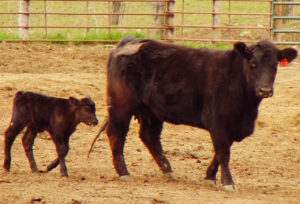 In 1997 the USDA conducted the first and only survey of U.S. beef cattle herds using a commercially available blood test (ELISA). They tested 10,372 cows in 380 herds finding that 7.9% of herds had 1 or more ELISA-positive cows. They also discovered that 92% of beef producers were either unaware of Johne’s disease or recognized the name but knew little about it. Also worth noting about that survey is that 70% of surveyed herds were commercial cow-calf operations (average herd size 137 cows). The remainder were registered (purebred) herds or herds with a combination of both commercial and registered cattle.

Data from the Johne’s Testing Center (JTC) suggest that Johne’s disease is much more common. In 2017 the JTC found that 18% of 578 fecal samples submitted from beef cattle were PCR-positive for MAP (Randall et al, 2018 AABP proceedings). Granted, this is not a survey: These samples most often were submitted because of a suspicion of Johne’s disease. However, most of these samples came from registered (purebred) beef cattle herds of many different breeds from across the U.S. These findings and the impressions of veterinary practitioners indicate that Johne’s disease is far more common in beef cattle, particularly herds with registered cattle, than most people realize.

Prevalence studies in Europe, summarized by Nielsen & Toft (Prev.Vet.Med. 88:1-14,2009) reported MAP infection prevalence in cattle but did not discriminate between dairy cattle and beef cattle. In Europe many cattle are dual purpose, i.e. used for both dairy and beef production. 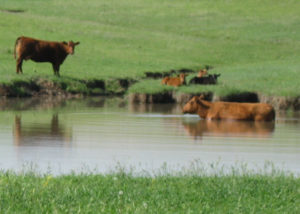 MAP is an obligate animal pathogen. This means that the only place they can multiply in nature is inside an animal (ruminant). Most accurately, it is inside cells that are part of the animal’s immune system called macrophages. When MAP leaves an animal, for example in the feces, it can survive at low numbers for a long time (up to a year) in environments such as soil and water, but it cannot multiply there. Consequently, the primary source of infection is a MAP-infected animal and its manure, and the resultant contaminated environment.

As MAP infection progresses in an animal, the number of bacteria being excreted steadily increases. Cattle produce more than 100 pounds of manure a day. This contaminated manure may run off pastures or fields into streams, ponds and groundwater. This means that the environmental burden of MAP can increase, and can spread beyond herd premises. For more detailed information on the survival characteristics of MAP see the part of this website called “Biology of MAP”.

Milk from infected female animals is a second source of MAP infection. Just as with fecal shedding, the likelihood of MAP being excreted into milk increases with time as the infection progresses. MAP may be excreted directly into the mother’s milk and/or the surface of the teats might be contaminated with infected manure. The probability of young animals becoming infected by drinking milk from infected cows is a direct function of the time spent with the mother.

In recent years the concept of the “super-shedder” has been developed. This is a cow that sheds huge numbers of the organism and yet is often clinically normal at the time tested. This single animal could represent the source for a majority of new cases in a herd, excreting more than 10,000 MAP per gram of manure. Identifying and removing heavy-shedding cattle from a herd is critical to limiting the spread of the infection.

Most MAP transmission occurs from adult infected animals to young calves through the fecal-oral route. The organism is swallowed in manure-contaminated milk, water or feed; sometimes manure is swallowed directly. MAP is also shed directly into the milk and colostrum of infected dams in later stages of infection, providing another route of exposure for susceptible young animals. 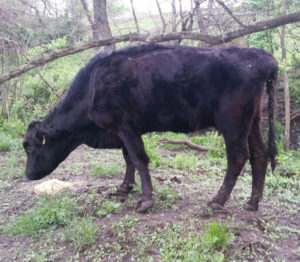 Another transmission route is in utero: a fetus may become acquire the infection from its infected dam even before it hits the ground. The clearest example of this was an embryo transfer case managed under the strictest of research biosecurity conditions to prevent any exposure to MAP after birth (e.g., C-section birth and removed immediately from recipient cow, colostrum and milk collected from a different cow that was repeatedly test-negative bottle-fed, hay from uninfected herd pastures, etc.). While the embryo recipient cow was Johne’s disease test negative at the start of the pregnancy, it became strong ELISA-positive result in month six. After the C-section, the recipient cow was proven infected at necropsy. Two years later, the (very valuable) embryo calf was ELISA-positive and MAP infection was confirmed at necropsy. The recipient cow had been purchased from a herd with a history of Johne’s disease.

There is no transmission risk through nose-to-nose fence line contact (unless contaminated manure is sluicing under the fence), through sneezed aerosols, or via artificial insemination or natural breeding. The most likely way MAP initially enters a herd is when a silently infected animal is purchased and introduced.

These transmission factors form the basis of MAP infection control: protect the future of your herd (the youngsters) by making sure they are not exposed to potentially contaminated adult manure from potentially infected animals. The extent and duration of exposure to contaminated manure and milk from infected adult animals directly affects the likelihood of sufficient MAP transmission to cause a new case of infection. Clean, dry, birthing environments and housing of young animals away from the adult herd or flock limits the possibility of infection transmission. Conversely, dirty maternity pens or lots and fecal contamination of feed and water supplies will promote spread of the infection.

To be specific you must do two things:

Johne's disease affects a small proportion of commercial cow-calf herds. Purchased or leased animals, often bulls, introduce the MAP infection to herds. Registered breeders must eradicate the infection because of their potential to spread MAP by sale or lease of infected breeding stock.