American Bison (Bison bison) are susceptible to MAP. Outbreaks have been documented in multiple herds in the U.S. and Canada. The clinical presentation is just low body condition with diarrhea being uncommon. 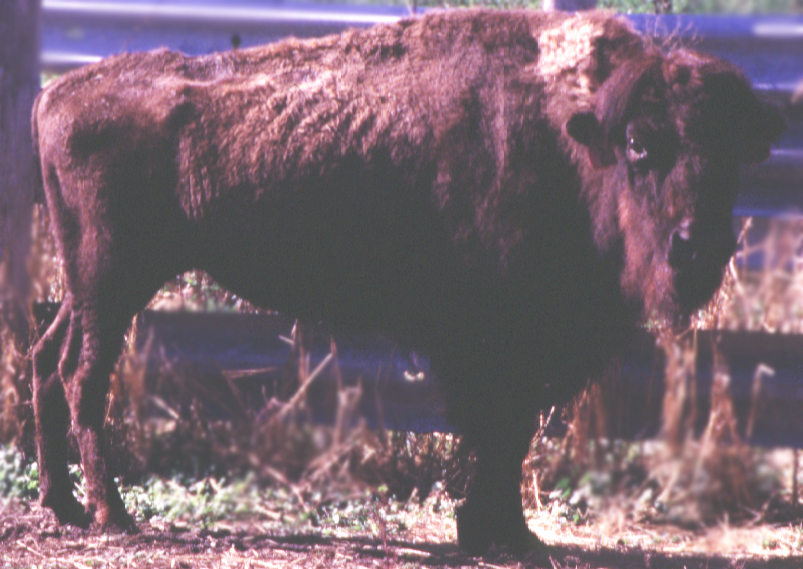 Most of our knowledge regarding Johne’s disease in Bison come from a study of one outbreak as reported by Buergelt et al. (The pathology of spontaneous paratuberculosis in North American Bison (Bison bison), Veterinary Pathology 37:428-438, 2000). The following are excerpts from that Open Access publication:

Gross and histopathologic examinations were performed on 70 North American bison (Bison bison) from a Mycobacterium avium paratuberculosis culture–positive herd. The bison examined were part of a breeding herd totaling 2,800 animals. Of the examined bison, the gross changes consistent with paratuberculosis included weight loss due to skeletal muscle mass reduction, atrophy of body fat, or both, in 28 of 70 (40%) animals; thickening of the mucosa of the small intestine in 8 of 70 (11%) animals; and prominent mesenteric or ileocecal lymph nodes in 16 of 70 (23%) animals. One animal had distended serosal lymphatics. Histologic lesions compatible with Johne’s disease were diagnosed in 30 of 70 (43%) bison on the basis of the demonstration of noncaseating granulomatous inflammatory infiltrates and of one or more acid-fast bacilli characteristic of Mycobacterium avium paratuberculosis. A suspicious diagnosis of Johne’s disease was obtained in 11 of 70 (16%) bison on the basis of the observation of noncaseating granulomatous inflammatory infiltrates without demonstrable acid-fast bacteria. Twenty-nine of 70 (41%) animals were assessed as histologically paratuberculosis free.

From the comparison of these results, we concluded that the incidence of paratuberculosis infection in bison was higher when using PCR testing than histopathology or other tests. Some of the tests correlated with each other, whereas others did not. In some circumstances, acid-fast bacteria were microscopically detected in the tissue of bison, but the organisms could not be cultured from feces or tissues, and specific antibodies could not be detected from serum samples. This suggests that tests that work for cattle need to be modified to make them work reliably for bison. The discrepancy between tests prompted the overall conclusion that the results of attempts to diagnose paratuberculosis in bison with the test methods usually applied to cattle do not follow the pattern of sensitivity and specificity expected from these tests in cattle.

Bison are susceptible to MAP infections and Johne's disease has been diagnosed in multiple U.S. and Canadian herds. This page describes special features unique to Johne's disease in bison.