Heat is commonly used to kill microbes and render feed for animals and food for humans safe for consumption. The thermal tolerance of MAP, specifically the capacity to survive pasteurization, has received considerable research attention. Some published reports suggest that MAP can survive standard commercial HTST pasteurization (161F [71.7C] for 15 seconds) while others suggest it can not. There is no question that these time-temperature combinations kill the vast majority of MAP in milk or meat. 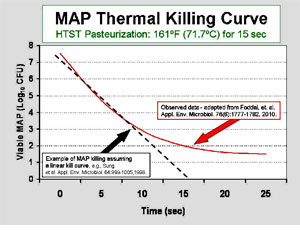 The scientific debate concerning the effectiveness of pasteurization centers around whether every last single MAP cell is killed every time. At the core of this debate is an assumption that the “killing curve” is linear, i.e. a straight line when plotted on a log-linear graph showing the number of remaining living organisms at each time point. For an example, see the dashed black line on the adjacent graph. Experiments that count living MAP after 0, 5, and 10 seconds of exposure to heat yield counts of surviving MAP cells. These points on a graph are then connected by a straight line resulting in the conclusion that 5 or more logs of MAP cells will be killed by pasteurization and that after 15 seconds of this heat exposure all MAP cells will be dead.

Data from multiple investigators and diverse lines of investigation suggest that the killing curve is actually not linear. Rather, it seems that the curve plateaus, a so called “tailing-effect”. This means that the rate at which the initial number of MAP dies off when exposed to more and more heat slows down, and that a small population may be unaffected. This tailing of the thermal death curve for MAP was recently shown in the study of Foddai et al. as illustrated by the solid red line on the adjacent graph. Nonlinear killing of MAP by heat in the range used for HTST pasteurization of milk is consistent with the recovery at low levels of viable (living) MAP from retail HTST pasteurized milk as reported by three independent studies in three different countries.

One of the most comprehensive pasteurization studies was done using pilot plant pasteurizers by German researchers at the Institute for Hygiene and Food Safety and Institute for Dairy Chemistry and Technology of the Federal Dairy Research Centre. The resulting 30 page monograph authored by P. Hammer et al. in 2002 is provided here because it is so difficult to otherwise obtain. Those authors concluded: “…low numbers of MAP will survive HTST treatments…” Hammer monograph on pasteurization-2002

Several theories have been suggested to explain the survival of low numbers of MAP after pasteurization. Examples are: 1) formation of large clumps of MAP cells providing protection of the inner-most cells from heat; 2) a small portion of MAP cells may be in a dormant or resting state that is more heat-resistant; 3) MAP may produce spores, or spore-like forms, that have heightened heat resistance. As yet, none of these theories has been convincingly proven for MAP. Moreover, not all experts agree that the tailing effect for the MAP thermal death curve is correct.

Concerning exposure to cold, in 1977 Richards and Thoen showed that the number of living MAP in fecal samples from naturally and experimentally infected cattle was significantly decreased after freezing at -70°C after 3 weeks. Continued refrigeration up to 15 weeks did not result in further decline in the number of MAP.

Studies on suspensions of MAP (10^6/ml) in broth culture media held at refrigerator temperatures (4°C) gave similar results. Counts of living bacteria declined precipitously with greater than 1 log decrease within 5 days. Then, a residual population of apparently cold-tolerant MAP cells (roughly 1% of the starting number) persisted to the end of the experiment at 25 days (Collins, unpublished data). For comparison, in studies on the cause of bovine tuberculosis (Mycobacterium bovis) when 10^7 M. bovis/ml were suspended in phosphate buffer (pH 7.2) and held at refrigerator temperatures (2-4°C), 50% survival was found after 21 days and 2% survived after 1 year.

Interestingly, results of studies on cold tolerance of MAP seem to mirror those of heat tolerance, i.e. there is an initial die-off of susceptible MAP cells followed by prolonged survival of a subpopulation of resistant cells. In other words, the killing curves are non-linear and may indicate a mechanism for a subset of MAP cells to survive harsh temperature conditions.

A plausible explanation for MAP’s resistance to heat and cold or other environmental stressors is its capacity to form endospores as convincingly shown by Lamont et al. in 2012.

UV doses required for bacterial and viral inactivation are relatively low, typically in the range of 2 to 6 mW-s/cm2 for 1 log inactivation. (Since water characteristics such as pH, hardness, turbulence, turbidity, and biological oxygen demand dramatically affect UV disinfection efficiency, any generalization of these doses to other water treatment protocols would be ill advised.) When 10^5-10^6 MAP were suspended in sterile deionized water 4 mW-s/cm2 was sufficient to achieve a 1 log reduction in viable counts and at UV doses greater than 15 mW-s/cm2 complete disinfection was achieved (Manning, unpublished data). Studies on use of UV treatment to kill MAP in milk are in agreement with these findings.

Older literature concerning the effects of natural sunlight on mycobacteria in the environment indicate that sunlight (presumably UV radiation) decreases the survival rate and that MAP is more resistant to adverse effects of sunlight than is M. bovis. Recent work in Australia, however, indicates that UV light had minimal effect on MAP viability in soil spiked with the bacteria.

A study on irradiation of MAP suspended in bovine colostrum found that if frozen bovine colostrum spiked with 10^4 MAP/ml was exposed to 10 kGy (kilogray) gamma irradiation (60Co gamma-beam facility in Dagneux, France), 100% of the organisms were killed. To place this dosage of gamma-irradiation in perspective it should be noted that 7 kGy is the maximum allowable dosage for meat treatment in the U.S., 30 kGy is the allowable dose for treatment of dried spices, and 40 kGy is used to sterilize foods for the NASA (U.S.) space program.

Mycobacteria are notorious for their resistance to antibiotics that kill most other bacteria. Only a select few antibiotics can be used to treat mycobacterial infections effectively and in most cases the course of therapy is weeks to months. MAP, like its close relatives MAA and MAH, is even resistant to antibiotics that normally are efficacious against M. tuberculosis, the cause of tuberculosis. Antimicrobial therapy for Johne’s disease is not often attempted, as the cost of the drugs for these large animals and the duration of treatment required make it cost-prohibitive for livestock, and most of the drugs are not legal for use in food producing animals. 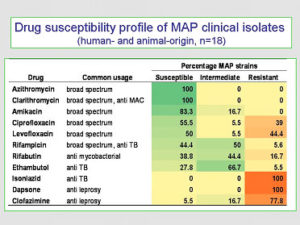 Drug Susceptibility of MAP. A study assessing antimicrobial agents to determine which were most effective against MAP specifically (Krishnan et al. J. Antimicrob. Chemother. 64:310-316, 2009) found that the in vitro drug susceptibility pattern for MAP was similar to that of MAH, and did not differ significantly among MAP isolates originating from humans or animals (see details in the adjacent graphic).

MAP, like other mycobacteria, are resistant to common disinfectants. However, phenolic and cresylic disinfectants are effective. Commercial disinfectant products labeled “tuberculocidal” should generally be effective against MAP. Research in this area was done in the 1950s and there is little current information to substantiate these observations or make more specific recommendations regarding products, concentrations or required contact times. 1-Stroke Environ® is a product commonly used by veterinarians that is believed to be effective at killing MAP. Since every disinfectant is inactivated by organic material, there is no point in using them on dirt floors, pastures, wood-floor stalls, etc.

MAP has been recovered in water runoff from infected farms. It also has been recovered from raw water entering a water treatment plant. Should MAP contaminate water for domestic use, chlorination is unlikely to kill most MAP since, like other mycobacteria, it is resistant to the levels of chlorine commonly used to treat domestic water supplies. Few attempts to recover MAP from drinking water have been reported. However, Beumer et al. (Am. Soc. Microbiol. Abstracts, 2008) reported detection of MAP genetic material in 84-92% of 1.0 liter domestic cold water samples by real-time PCR (the author did not attempt to isolate the living organism). Most samples had an estimated MAP concentration of fewer than 500 MAP per liter. Much more research is needed to determine what level of exposure to MAP humans may experience via drinking water, and whether this exposure has any relevance to human health.

MAP is exceptionally resistant to physical factors such as heat, cold, and sunlight. The capacity of MAP to survive food manufacturing processes such as pasteurization is of particular concern.