One of the most comprehensive reviews on what happens to MAP after it leaves the host animal was published by G. Elliott et al. titled: Environmental risk factors in the incidence of Johne’s disease. It was published in the journal Critical Reviews in Microbiology, 41:4, 488-507, 2015 and has 179 references. The graphic below is from that publication. 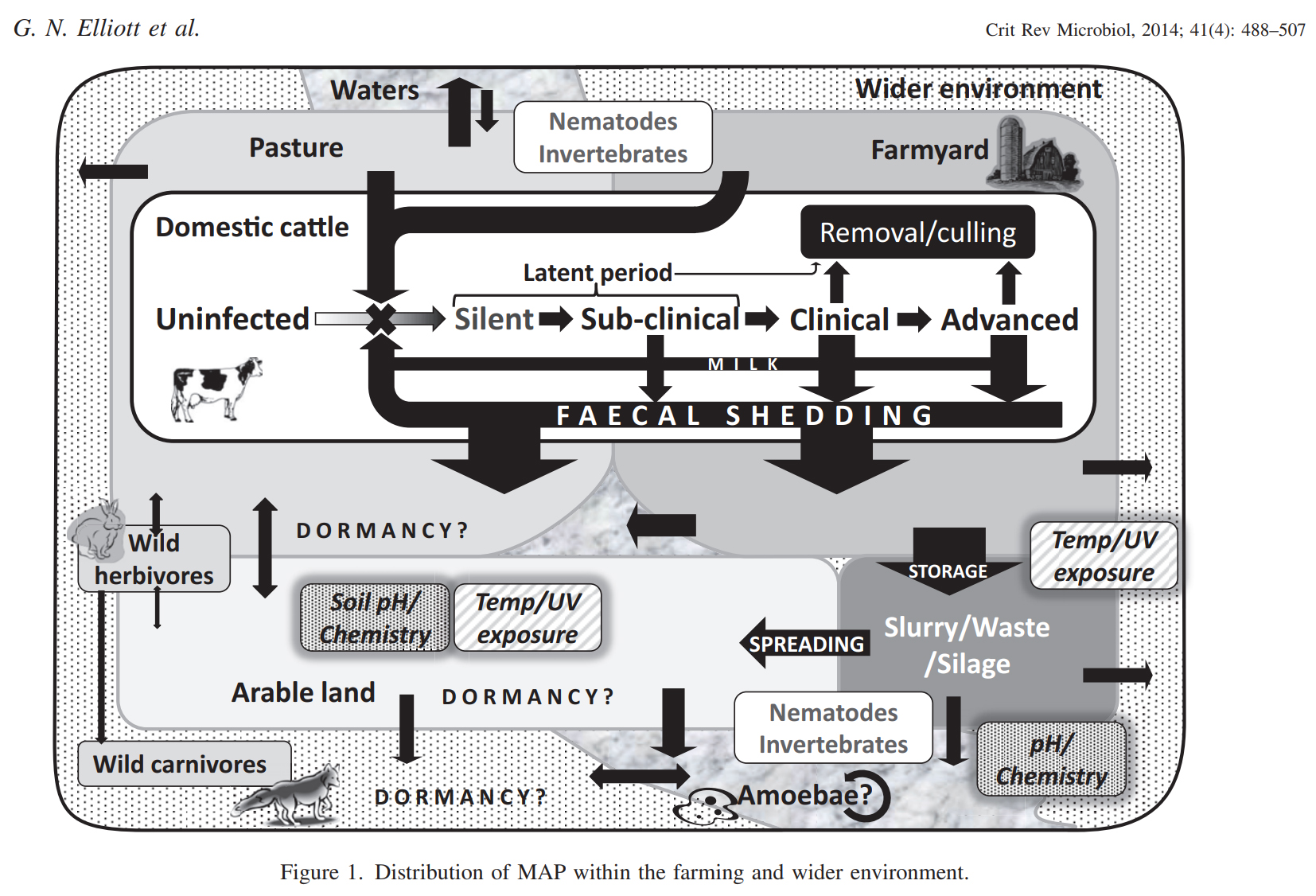 Lovell et al. reported in 1944 that after spiking sterilized pond water (pH 5.5) with 0.1, 1.28 or 3.4 mg wet weight of MAP per 100 ml of water and holding it at room temperature the organism was recovered in samples tested monthly for up to 9 months. In 1956 Larsen et al. reported on the survival of MAP in spiked tap water of different pHs (degree of acidity) held at 38 C in the dark. In neutral pH water (7.0) MAP was recovered up to 17 months (517 days) post-inoculation while for pH 5.0 and pH 8.5 water MAP was isolated up to 14 months post-inoculation. 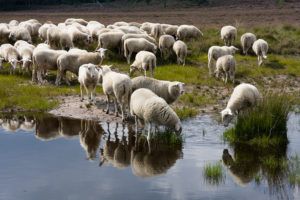 Most recently, Whittington et al. in 2005 reported similarly prolonged survival of MAP in water and sediment behind dams. They concluded that water may be a significant reservoir of MAP infection on farms. Pickup et al. recovered MAP from domestic water reservoirs. (see references below).

For more general references regarding mycobacteria in water the reader is directed to the review article by C.H. Collins. Subsequent to publication of this review, recognition of the global AIDS epidemic and associated opportunistic M. avium infections led to a resurgence of research interest in this opportunistic mycobacterial pathogen and, in particular, investigations concerning the source of this organism. Most investigations point to domestic water supplies as the source of human M. avium subsp. hominissuis (MAH) infections due in part to their abundance in the environment, ability to form biofilms in water distribution systems, and their resistance to chlorination.

The ecology of MAP in biofilms (complex communities of microbes, and the slime secreted by these microbes, that cover surfaces of pipes and other surfaces exposed to bacteria-containing fluids) has not been studied until recently. This pathogen readily forms biofilms that may maintain their presence in water distribution systems, increase their resistance to chlorination and serve as hidden sources of contamination in the farm environment. 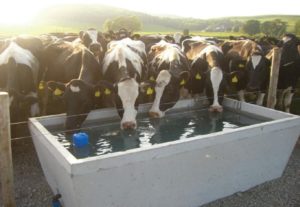 Livestock watering troughs were the focus of several recent studies. A large inoculum of MAP was added to the water in four types of troughs (concrete, plastic, stainless steel and galvanized steel). After 2 weeks, the organism could not be found suspended in the water, but in each case a biofilm had formed on the trough material with high concentrations of MAP. This in fact had occurred within three days of inoculation, and the organisms persisted for more than 300 days on concrete troughs.

To reduce exposure of susceptible animals to MAP on infected farms, the authors recommended best management practices should include cleaning out and removing slime build-up on trough surfaces on a regular basis. In choosing new troughs, stainless steel is recommended. Read more here. 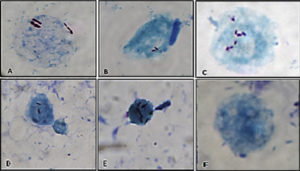 Like its closest cousin, M. avium subspecies hominissuis (MAH), MAP can infect and replicate in free-living amoeba such as Acanthamoeba. These unicellular organisms common in aquatic environments act as free-living macrophages and potentially offer an ecological niche outside the host animal where MAP replication or at least persistence can occur. Moreover, the virulence of the organism may be enhanced by growth inside these amoebae. The adjacent image shows MAP inside Acanthamoeba castellanii (Salgado et al. Veterinary Microbiology 175:26-34, 2015).

Survival in soil, feces and soil-feces mixtures applied to the surface of fields/pastures

On the subject of environmental survival of MAP, the 1944 publication by Lovell et al. has become a classic reference. A series of studies using naturally infected bovine feces were conducted in which the infected fecal matter was exposed to a variety of natural conditions such as freezing, drying, sunlight, changes in ambient temperature, and rain, with regular attempts to re-isolate MAP. In general they found survival of MAP in feces kept outdoors up to 152 to 246 days depending on specific conditions. Drying of soil appeared to shorten survival. The authors recommend considering a pasture contaminated by the organism as a potential source of infection for at least one year given the longevity of MAP. They mention that this supports recommendations of earlier workers (1929-1933). The commonly made statement that MAP survives a year on pastures, found in most literature on Johne’s disease, likely originates from the work of Lovell et al. 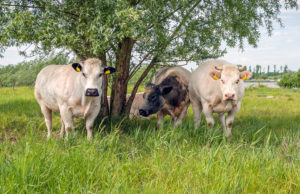 MAP is resistant to heat, cold, drying and acidic conditions, but does not replicate in the environment. As an obligate pathogen, MAP in the environment does die off completely, but not quickly. When a premise is contaminated by MAP-containing manure, approximately 90% are believed to die off within a few months, but MAP in low numbers can be recovered for more than a year. The relevance of this persistence at low levels to new cases of infection is not known. In Australia, MAP could be isolated (albeit from fewer and fewer samples over time) from shaded soil (including soil shaded by crops) up to 55 weeks, and in shaded trough water at 48 weeks. Even greater longevity was noted in trough sediment. MAP was isolated from grasses germinating through manure-laden soil again in the pattern observed for MAP isolation from soil: greater MAP longevity was seen in grasses grown from completely versus 70% shaded soil boxes (24 versus 9 weeks). This study’s comparison of shaded versus partially shaded sites led the authors to conclude that diurnal temperature changes was more relevant in hastening complete MAP die-off than was just the UV radiation itself, and that removing vegetation to maximize temperature changes at soil level may be beneficial. Based on these data Whittington et al. in 2004, contaminated drinking water may remain a reservoir for new infections longer than contaminated ground. This publication also provides an excellent table of prior research on MAP survival in soil. Other work from that very productive research group published in 2009 demonstrated that MAP can adhere to soil particles and that this is heavily influenced by soil pH.

Factors that may shorten the estimated survival time of MAP in soil are drying, exposure to sunlight, pH above 7.0 and low iron content. Bovine urine is also hostile to MAP survival and increasing concentrations of bovine urine (2-10%) caused decreasing survival rates (at pH 6.3 to 6.6). A 1999 study on MAP survival in spiked soils in Australia found shorter survival in dry alkaline soils and no apparent effect of UV light.

Observations regarding the associations among soil pH, calcium or iron content and the incidence of paratuberculosis have a long history. The 1956 review article on Johne’s disease by Doyle covers most of the early observations on association of soil type and paratuberculosis incidence and the 1997 review by Johnson-Ifearulundu complements it by covering more recent literature. The fact that this observed association (i.e. not a proven causal link), in particular concerning soil pH, has been made in England, France, The Netherlands, and the U.S. adds credibility to the idea that somehow soil composition and paratuberculosis are connected. In addition, Johnson-Ilfearulundu and Kaneene recently showed by careful epidemiologic analysis that in the state of Michigan in the U.S. the practice of lime use on pastures of application of lime to pastures (a practice that should increase soil pH) in 1993 was associated with ten-fold lower odds of a dairy herd being serologically test-positive for MAP infection in 1996. As an aside, it is interesting to note that in a very different study an association was demonstrated between soil acidity and frequency of skin test reactions (diagnostic tests for exposure or infection with mycobacteria) in humans. 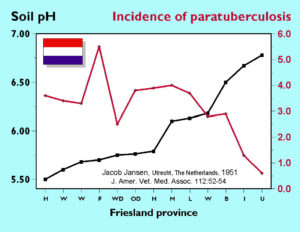 These epidemiological observations have led to speculation concerning mechanisms by which soil pH, or its interaction with soil calcium and iron content, affect MAP survival. It should be noted, however, that the relationships observed are indirect, i.e. simply the association between and incidence of clinical bovine paratuberculosis and broadly characterized soil types. No laboratory studies have been done to verify if a particular soil type affects MAP survival or to explain the mechanism.

Survival of MAP in feces injected into soils 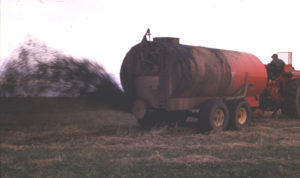 Manure management is a component of domestic agriculture enterprises. Modes of dispersal include spreading it on fields, injection into the soil and slurry pit storage for later dispersal. 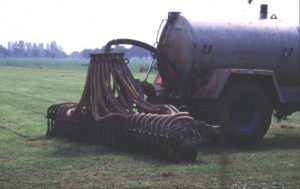 No published reports on MAP survival after injection of contaminated feces into soil were found. Intuitively, the advantage of this practice is that it lessens opportunities for contact between MAP and animals or forage crops and decreases the chance for contamination of surface water by rainfall run-off. However, feces injection might also favor survival of MAP by placing it away from more harsh conditions of drying and sunlight. Other than demonstration of MAP adherence to soil particles as a function of soil pH, minimal research has been conducted in this area.

Jörgensen published the first comprehensive study of its kind on survival of MAP in slurry in Denmark in 1977. In his work he used cattle slurry (pH 8.5, dry matter 7%), swine slurry (pH 8.3, dry matter 8.3%), and a mixture of the two (pH8.4, dry matter 7.7%). After spiking each slurry preparation with 3 x 10^7 MAP/ml, he bubbled a mixture of hydrogen and nitrogen gas through the slurry to secure anaerobic conditions and then stored the slurry at 5°C or 15°C. Jörgensen reported that the number of colonies of MAP isolated on modified Löwenstein-Jensen medium dropped drastically between sampling days 1 and day 7 but then remained relatively stable until recovery of the organism stopped indicating the limit of survival. At 5°C the survival time was 252 days in all three kinds of slurry, and at 15°C it was 182 days in swine slurry, 98 days in cattle slurry, and 168 days in mixed slurry. Comparable findings have been reported on survival of Mycobacterium bovis in cattle slurry.

Correctly managed composted organic material may be effective in killing MAP, but research on the topic is limited. This is consistent with time-temperature profiles of properly composted animal waste and thermal survivability characteristics of MAP.

MAP replicates inside animal cells. While waiting to be ingested by another animal host, MAP has devised strategies to persists in soil and water.