There are relatively few surveys for Johne’s disease in goats. Three European studies reported a low MAP infection prevalence (see Nielsen & Toft (Prev.Vet.Med. 88:1-14, 2009).  Norway recognized that paratuberculosis was a problem for a limited number of its goat herds and effectively eradicated the infection, according to their 2016 report.

A systematic literature review published in 2014 found that in Latin America and the Caribbean for goats the animal-level and herd-level of paratuberculosis was 4.3 % and 3.7 %, respectively. 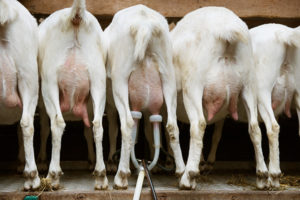 In Ontario , Canada, Dr. Cathy Bauman and colleagues surveyed 580 goats (lactating and 2 years of age or older) randomly selected from 29 randomly selected dairy goat herds. Animals were tested for MAP in fecal samples by both culture PCR, and for serum antibodies by enzyme-linked immunosorbent assay (ELISA). Using sophisticated statistical methods they concluded that the estimated farm-level true prevalence was 83.0% (proportion of dairy goat herds estimated to be MAP-infected). 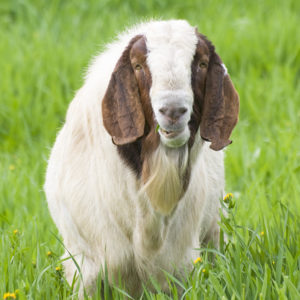 In the U.S., Patrick Pithua and Nathaniel Kollias from the Dept. of Veterinary Medicine and Surgery, University of Missouri collected blood samples from goats ≥24 months of age in 25 Missouri Boer goat herds and tested them for  MAP antibodies using a commercial ELISA kit. Herds were declared positive for MAP if one or more goats in the herd tested ELISA-positive. Of 629 goats tested only 12 were ELISA-positive giving an estimated true animal-level prevalence of  1.4%. However there was at least one ELISA-positive goat in 9 of the 25 herds tested giving an estimated true herd-level prevalence of  54.7%. They concluded that MAP infections are endemic in Missouri Boer goat herds. This study was published in Veterinary Medicine International.

In 2017, the Johne’s Testing Center, University of Wisconsin received 709 goat fecal samples for testing by PCR. Of these, 75, or 10.5%, were PCR-positive for MAP and these originated from over 5 different states. That same year, 1,303 serum samples were tested for antibodies to MAP by ELISA, finding 69 (4.9%) were positive. States having the most goats testing positive for Johne’s disease overall were Missouri, California, Indiana, Minnesota, Ohio, and Oregon. While these samples were submitted for the purpose of diagnosing Johne’s disease, not a random survey, the results do indicate that Johne’s disease is common among goats in the U.S. Many of the goats tested were pets such as Nigerian Dwarf goats and Pygmy Goats.

MAP is an obligate animal pathogen. This means that the only place MAP can multiply in nature is inside the goat. Most accurately, it is inside cells that are part of the animal’s immune system called macrophages. When MAP leaves an animal, for example in the feces, it can survive at low numbers for a long time (up to a year) in environments such as soil and water, but it cannot multiply there. Consequently, the primary source of infection is a MAP-infected animal and its manure, and the resultant contaminated environment.

As MAP infection progresses in an animal, the number of bacteria being excreted steadily increases. Goat manure contaminates barns, pastures or fields into streams, ponds and groundwater. This means that the environmental burden of MAP steadily increases unless the source (MAP-infected goat) is removed from the herd. For more detailed information on the survival characteristics of MAP see the part of this website called “Biology of MAP”.

Milk from infected nannies is a second source of MAP infection. Just as with fecal shedding, the likelihood of MAP being excreted into milk increases with time as the infection progresses. MAP may be excreted directly into the mother’s milk and/or the surface of the teats might be contaminated with infected manure. The probability of young animals becoming infected by drinking milk from infected goat is a direct function of the time spent with the mother. 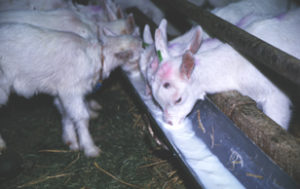 Most MAP transmission occurs from adult infected goats to young kids through the fecal-oral route. The organism is swallowed in manure-contaminated milk, water or feed; sometimes manure is swallowed directly. MAP is also shed directly into the milk and colostrum of infected dams in later stages of infection, providing another route of exposure for susceptible young animals. Pooling of milk from multiple nannies to feed multiple kids is a significant risk. 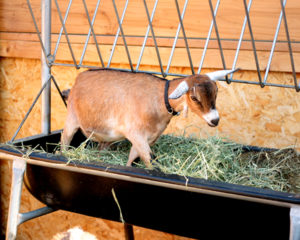 Goats are coprophagic (eat feces) and they also like to climb, getting into and defecating in feeders and waterers. These behaviors obviously facilitate spread of the MAP infection, making it extra important to detect and remove animals shedding MAP in their feces.

Another transmission route is in utero: a fetus may acquire the infection from its infected dam even before it hits the ground. There is no research in goats helping us to know the rate at which this occurs but if we borrow from cattle studies we can roughly guess that it happens 15-40% of the time, depending on how far advanced is the MAP infection in the dam.

There is no transmission risk of nose-to-nose fence line contact, through sneezed aerosols, or via artificial insemination or natural breeding. The most likely way MAP initially enters a herd is when a silently infected animal is purchased and introduced.

These transmission factors form the basis of MAP infection control: protect the future of your herd (the young kids) by making sure they are not exposed to potentially contaminated adult manure from potentially infected animals. The extent and duration of exposure to contaminated manure and milk from infected adult animals directly affects the likelihood of sufficient MAP exposure to cause a new case of infection. Clean, dry, birthing environments and housing of young kids away from the adult herd limits the possibility of infection transmission. Conversely, dirty maternity pens or lots and fecal contamination of feed and water supplies will promote spread of the infection.

Goats, like other ruminants, are susceptible to MAP infection. MAP is transmitted from infected adult animals to young (typically less than 6 months old) animals through manure and milk contaminated with the organism. Soil, water and forage in the environment contaminated by MAP-containing manure can spread the infection.