These images are provided to foster education about Johne’s disease. They are distributed under the terms of the Creative Commons Attribution License which permits unrestricted use, distribution, and reproduction in any medium, provided the source, Johnes.org, is credited.

Sheep with clinical Johne’s disease most often look like a poorly fed, unthrifty animal.  Although appearing sickly, sheep with Johne’s disease continue eating well.  And, in flocks with excellent nutrition and husbandry, even sheep with an advance MAP infection may appear healthy until one day they suddenly get thin. 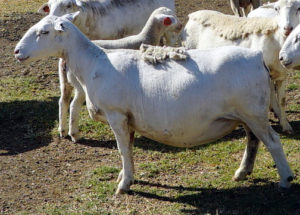 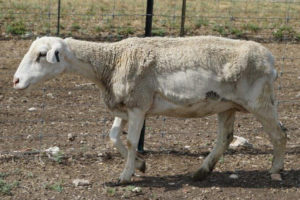 This second photo shows the same animal about the time she was tested for Johne’s disease. This animal was found to be shedding massive numbers of MAP in her feces by PCR on a fecal sample) and was also strongly positive by ELISA (VMRD kit).  After necropsy, her intestines and associated lymph nodes were also strongly PCR-positive. 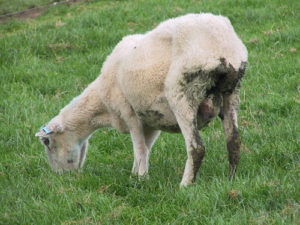 Sheep generally do not develop diarrhea, although the feces may become pasty like dog feces and appear with a “dirty rear end”. Intestinal parasites also can cause weight loss and diarrhea in sheep and should be tested for before considering Johne’s disease. If no parasites are found or animals are on effective parasite control programs, then Johne’s disease is a possible diagnosis and should be tested for, ideally by  fecal PCR. 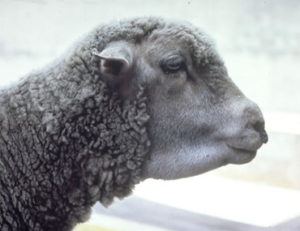 Bottle jaw is the results of malnutrition induced by the MAP infection which leads to low serum protein levels. Serum proteins help animals retain fluid within blood vessels, called oncotic pressure. When serum protein levels get too low, fluid leaks out into the surrounding tissues, called edema. When this edema happens under the jaw it is called submandibular edema – more commonly called “bottle jaw”, as in the sheep pictured to the right. Parasites can also cause bottle jaw and should be ruled out before testing for Johne’s disease.

The next series of three photos illustrates the tragedy of Johne’s disease. 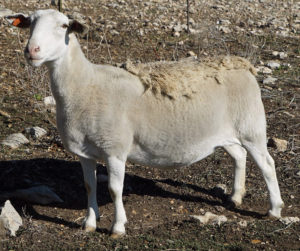 Shown here is a Dorper sheep (a fast-growing meat-producing sheep breed) born April 2015 in the U.S. In June of 2019, as part of a whole-flock test for Johne’s disease using pooled fecal PCR, this animal tested PCR-positive. The PCR Ct value was 25 indicating moderate to high levels of MAP shedding in feces (estimated at 10,000,000 MAP per gram of feces). And yet this ewe, which was 4-years-old at the time of testing, was clinically normal, as seen in the photo to the right taken just 60 days before the clinical signs began. It should be noted that this ewe produced grand champion son and was one of the more valuable animals in the flock. So, she was placed in isolation on the ranch allowing time to harvest eggs for embryo transfer to rescue the valuable genetics of this animal. 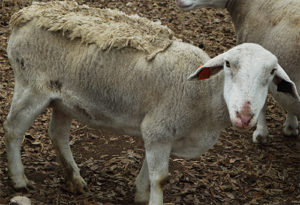 By April of 2020 this ewe was showing clinical signs of Johne’s disease. The rapid decline in body condition occurred in a matter of a few weeks. The next two images show her side-view and rear-view.

This series of slides illustrates the insidious nature of Johne’s disease. It silently enters sheep flocks with purchased animals, it slowly spreads to lambs in the flock. The incubation period is long. Even when the infection is fairly advanced and the sheep is shedding millions of MAP per gram of feces, the animal looks in perfect health. However, inevitably the animal develops clinical signs of Johne’s disease, weight loss and pasty feces. Although the animal has been MAP-infected for most of its life, the onset of clinical disease is sudden. Owners can mistakenly assume that the MAP-infection was recent when in fact the animal was infected for most of its life and shedding massive numbers of MAP capable of infecting lambs born on the property. This is why the infection is so insidious.

This problem occurred in a registered breeding flock with a excellent animal husbandry and nutrition. In less well-managed flocks clinical signs may have appeared earlier.