The graphic above depicts the incidence of Crohn’s disease by country (darker blue = higher incidence). It is adapted from the 2013 publication by Ng et al. Geographical variability and environmental risk factors in inflammatory bowel disease. Gut oi:10.1136/gutjnl-2012-303661. It mirrors the map for prevalence of Johne’s disease by country that can be found on the Dairy/Epidemiology page.

Whether MAP is a zoonotic pathogen (infection of animals transmissible to humans) is the single most critical scientific question regarding this pathogen. The answer will drive every facet of the diagnosis, control and prevention of this infection in animals.

If not a zoonosis, then Johne’s disease is a bothersome, but not overly important, animal health issue.

On the other hand, if it is a zoonosis, then MAP affects animals and humans alike, and animals are the source of human infections and disease. Thus, it would demand more aggressive control of MAP in food-producing animals to protect human health.

The question of whether MAP can infect and cause disease in humans is one or today’s most hotly debated and controversial areas of MAP scientific inquiry. Since new scientific publications dealing directly or indirectly with this topic appear frequently, it is challenging to keep this part of the johnes.org website up to date. We are addressing this by formulating fairly short answers to the more common questions and linking to publications and websites that can lead interested readers to more detailed information and sources that are regularly updated. The long list of references (most linked to original research articles) appears at the bottom of this page and is updated frequently.

1. How can humans be exposed to MAP?

Before listing potential routes of human exposure, it is useful to recap MAP’s life history. The main reservoir for MAP in nature is infected animals. MAP is considered an obligate pathogen, meaning that it replicates in infected animals. Among animals, MAP is found primarily in ruminants such as cattle, sheep, and goat. (Non-ruminant animals such as omnivores and carnivores are infrequently infected with MAP and the infection rarely progresses to disease.) Ruminant infections begin when MAP is swallowed. MAP then invades the intestinal wall, invades white blood cells called macrophages and starts multiplying. As the infection slowly progresses (often many years pass before an animal appears sick), MAP spreads from the intestine to multiple other tissues and organs in the animal via the blood stream. The liver, spleen and lymph nodes filter MAP from the blood stream. Inside the animal the highest number of MAP can generally be found at the initial site of infection, the terminal small intestine (ileum) and in lymph nodes.

An infected ruminant excretes MAP in its manure . The organism may also appear in the infected ruminant’s colostrum and milk, but in far fewer numbers. Typical farm manure management practices may result in contamination of soil and water with MAP. 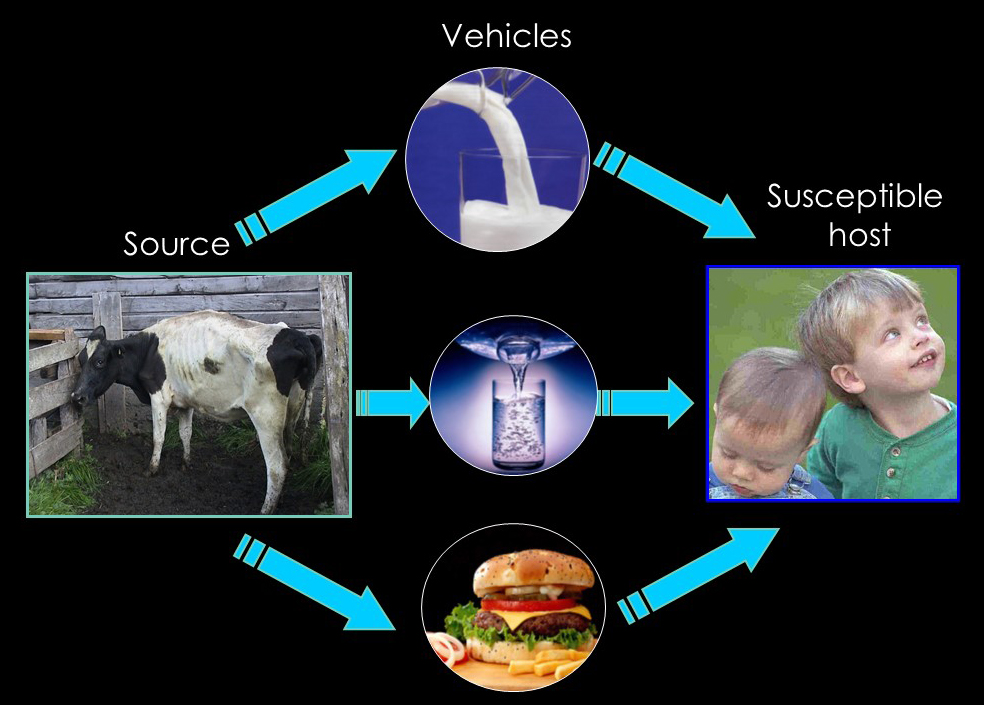 Given this natural history of MAP and food manufacturing practices, the following can be potentially MAP-contaminated and result in human exposure (ranked in decreasing order of probable importance):

Note: It is unknown how many exposures are needed and how many MAP may be required to initiate infection in a human, or even whether all humans are susceptible to infection. Therefore, it is difficult to predict the importance of if these potential routes of exposure. Also, the age of exposure is likely to be as important in humans as it is in all other animals.

Yes. Two studies, one authored by Abubakar et al. and the other by Feller et al., have assembled publications on studies searching for MAP, or immune responses to MAP, in humans -to establish whether MAP ever infects humans (see publications listed below). Both have concluded that MAP has infected humans although whether these infections subsequently were the direct cause of disease is an open question. In the cases when MAP could be isolated from humans, the genetic fingerprints of the organism were the same as those cultured from animals.

Note: Finding evidence of MAP infection does not necessarily indicate that MAP can cause disease in humans. The causation question remains unresolved.

3. Does MAP infection cause Crohn’s disease?

In the majority of published studies, evidence of MAP is found more often in people with Crohn’s disease than in other human populations. It is unknown if Crohn’s disease patients developed their disease first and then acquired the MAP infection or whether MAP actually contributed to their disease. Experimental infection trials in humans are unethical so there are no direct ways of proving that MAP causes Crohn’s disease. Evidence will always be indirect or circumstantial. However, the ability to cure Crohn’s disease using anti-MAP antibiotics, if proven, will be highly significant evidence supporting MAP as the cause.

4. What are the arguments for MAP as a cause of Crohn’s disease?

Borrowing from the publication by Sartor in 2005 (see reference list below), the following observations based on several studies support the hypothesis that MAP is one of the causes of Crohn’s disease:

5. What are the arguments against MAP as a cause of Crohn’s disease?

Borrowing again from the publication by Sartor in 2005 (see reference list below), the following observations support the hypothesis that MAP is NOT one of the causes of Crohn’s disease:

6. Is there a genetic component to acquiring Crohn’s disease?

Yes. Multiple genes have been associated with the development of Crohn’s disease. The two most significant are called NOD2 and ATG16L1. It is unknown exactly how or why these genes are linked to Crohn’s disease. It is known, however, that these genes regulate the human immune response to intracellular bacterial infections with organisms such as mycobacteria.

7. Is genetics relevant to the theory that MAP contributes to Crohn’s disease?

8. Has MAP been described as a factor in human ailments other than Crohn’s disease?

Yes. MAP was reported as the cause of lymphadenitis in a child and was detected in a patient with AIDS. In addition, MAP or an immune response to MAP has been found in cases of sarcoidosis, Blau syndrome (eye condition), Type I Diabetes Mellitus, and multiple sclerosis. The Human Para Foundation maintains a website devoted exclusively to human diseases linked with MAP.

A review of evidence for a link between exposure to Mycobacterium paratuberculosis and Crohn’s disease in humans. A report for the U.K. Foods Standards Agency.
Dr. Eileen Rubery, University of Cambridge, June, 2001

This 55 page document is a report by a scientist independently contracted to evaluate the M. paratuberculosis – Crohn’s disease link. The report is current, comprehensive, concise and lists 242 references. For those interested in this subject it is must reading.

This link provides access to The European Commission Directorate-General Health & Consumer Protection, Report of the Scientific Committee on Animal Health and Animal Welfare adopted 21 March 2000. This 76 page report is the product of a nine member panel of European experts. It provides an excellent review of the literature listing 372 references in its bibliography.

Websites related to MAP in humans

Prof. Hermon-Taylor, together with Dr Tim Bull and other members of the team at St George’s University of London and scientists at the Jenner Institute University of Oxford, developed a modern DNA vaccine against MAP. The Crohn’s MAP Vaccine team supports this ground-breaking work led by Dr Amy Hermon-Taylor (Prof. Hermon-Taylor’s daughter) and a large group of volunteers all of whom are directly affected by Crohn’s disease.

Hruska, K., & Pavlik, I. 2014. Crohn’s disease and related inflammatory diseases: from many single hypotheses to one “superhypothesis”. Veterinarni Medicina 59(12):583-630. [REVIEW with 72 references]

Scientific studies convincingly argue both for and against an association of MAP with human disease. Literature in this field is extensive, very technical, controversial and hotly debated among scientists. At the risk of over-simplification, we present here a compilation of findings on this important issue.