Johne’s disease can be controlled and even eliminated from infected herds. To accomplish this, however, it takes a thorough understanding of the disease by animal owners, consultation with a veterinarian, and requires use of one or more of the available diagnostic tests. Half-hearted or short-term attempts to control Johne’s disease generally will fail. A typical herd clean-up program may take 5 years or longer. Faster clean-up programs are possible, but they are usually more expensive. The basics of control are simple: new infections must be prevented, and animals with the infection must be identified and removed from the herd or flock.

Keep young animals away from adults’ manure. Infected adult cattle excrete MAP bacteria in their feces (manure). Calves swallowing milk, colostrum, feed or water contaminated with this MAP-containing manure are at risk of becoming infected. Therefore sanitation and manure management are critical to controlling of Johne’s disease. Because of the susceptibility of young calves to MAP infection, it is important to keep them well away from adult manure that may harbor the organism. The longer the separation of young stock and adults can be maintained the better.

Calves should be born in a clean dry environment with minimal fecal contamination. Prompt removal of the newborn calves from their mother is recommended for control of Johne’s disease, as well as several other dairy cattle diseases. If the dam herself is infected however (even if still clinically normal) the offspring may already have become infected before they were born. This risk is dependent on how advanced is the MAP-infection. Roughly 40% of cows with clinical signs of Johne’s disease will have already infected their calf in utero (before birth). For clinically normal cows the rate is approximately 15%.

Manure contamination of feed can occur when the same equipment is used to move both feed and manure – this practice should be avoided. Also, manure contamination of water, particularly ponds, wallows or streams that animals can drink from, must be avoided to limit spread of the infection. Fence off those muddy manure-laden areas from young stock.

If possible, contaminated pastures should be tilled and re-seeded. When possible, heavily contaminated land should be kept free of young animals for at least 4 months while the majority of MAP die off. Recent studies have shown that a small population of MAP may still remain up to a year later – therefore do not put young animals on fields recently treated with manure from or grazed by infected animals, and do not feed the next crop to young animals. 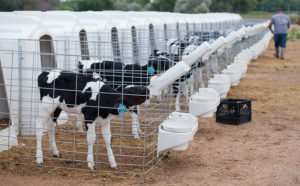 Feed clean, uncontaminated, milk and colostrum. Many cows infected with MAP will excrete the bacterium in their milk. MAP excretion in milk happens most often in animals with clinical signs of Johne’s disease, but can occur in infected animals that appear healthy too. Because no diagnostic test can detect all MAP-infected animals, to control Johne’s disease it is best to avoid feeding of raw, non-pasteurized milk. Artificial milk replacers are pasteurized and considered low risk for MAP transmission, although commercial replacer products have been found to harbor MAP.

Colostrum, the antibody-rich milk produced by dams during the first few days after giving birth, can contain MAP. Because colostrum is critical to the health and survival of newborns, feeding of colostrum is essential. The risk of transmitting MAP in colostrum can be minimized by:

Remove the sources of MAP (infected adults) from the herd 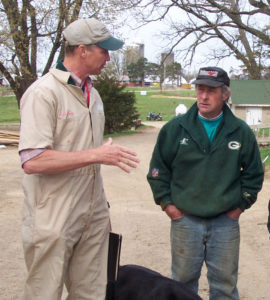 Often referred to as a “test-and-cull” program, this practice is essential to successful control of Johne’s disease in herds or flocks in a reasonable period of time. Clearly, there are situations where alternatives must be considered: testing and culling of all test-positive animals is not always required. “Test-and-manage” might be more appropriate in some situations. Decisions on how best to implement testing in a Johne’s control program should be made in consultation with your veterinarian.

For all animal species, try to keep good animal identification and breeding records. Your control program will be much more effective if you can look back and see which animals might have been exposed while young, or which animals were born to what later turned out to be an infected dam.

MAP is resistant to most disinfectants; washable tools, troughs, and feed dishes may be treated as directed on the bottle with a disinfectant labeled as “tuberculocidal”. Since organic material deactivates the disinfectant, items should thoroughly cleaned with soap and water, rinsed and dried before the disinfectant is applied. Tuberculocidal disinfectants usually contain strong chemical compounds and should be used carefully. The instructions provided on the label for proper use and safe handling should be followed precisely.

Protect your young stock by making sure they don’t swallow milk, water or other feed that contains MAP. Use diagnostic testing to find and then remove MAP-infected adult animals thereby limiting ongoing MAP contamination of your farm.