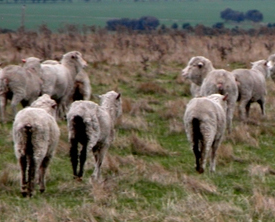 All ruminants are susceptible to MAP. There are two main strains of MAP designated “S” for sheep strain and “C” for cattle strain. Some publications refer to these ast Type II and Type I for the cattle (C) and sheep (S) strains, respectively. These designations can be somewhat misleading. The S strain of MAP primarily infects sheep in Australia and this strain can infect other ruminants but seems less able to jump animal species than the C strain. The C strain is common in sheep in the U.S. and is the more “versatile” of the two strains freely passing between cattle, goats, sheep, bison, deer, elk and other such ruminants.

There is no proven MAP infection susceptibility difference between sheep breeds. However, many of the MAP-infected flocks found in Australia are of the Merino breed. This may not be a true genetic susceptibility but rather because they are among the most economically influential breeds of sheep due to their excellent fine wool production. Johne’s disease is seen less often in sheep bred for meat production.

Johne’s disease is common in sheep but has there are regional differences. In Australia, most of the disease is concentrated in the state of New South Wales. Readers should go to the excellent OJD website maintained in Australia for more information.

No surveys have been done in the U.S. but USDA reports that 16% of the national sheep flock is culled annually and over 10% of these culled sheep have weight loss but a good appetite. MAP could well be the cause of many of these culls.

A survey in Italy found that 74% of flocks were positive on a commercial blood test (ELISA) for Johne’s disease. A higher number of MAP seropositive ewes was recorded in the large flocks compared to smaller flocks. Surveys of cattle herds likewise find an association between herd size and likelihood of being MAP-infected. MAP infection was confirmed in 12.6% of the ELISA-positive farms by faecal culture. The true sheep-level seroprevalence was estimated at 15.1% ± 7.3% in the Marche region of central Italy.

A large survey of sheep, beef cattle and captive deer herds in New Zealand was reported in 2014. Across all species, 69% of farms had at least one species test positive animal. Sheep flocks had the highest rate of infection: 76% being MAP-infected. By comparison, 46% of deer herds were infected and 42% of beef cattle herds were MAP-infected. Differences were observed between the two main islands of New Zealand, with somewhat higher infection rates for sheep and beef cattle in the Northern Island and higher infection rates for deer in the South Island. These findings show that MAP infections are endemic across New Zealand. COntrol programs are extra challenging for the many operations in New Zealand that have more than one species of animal with transmission occurring between species. Read the full article in Preventive Veterinary Medicine for details.

Sadly, many owners of small sheep flocks, hobby farms, do not know about Johne’s disease and how common it is in sheep.

MAP is an obligate animal pathogen. For sheep, this means that the only place MAP can multiply in nature is inside the sheep. Most accurately, it is inside cells that are part of the animal’s immune system called macrophages. When MAP leaves an animal, for example in the feces, it can survive at low numbers for a long time (up to a year) in environments such as soil and water, but it cannot multiply there. Consequently, the primary source of infection is a MAP-infected animal and its manure, and the resultant contaminated environment.

As MAP infection progresses in an animal, the number of bacteria being excreted steadily increases. Sheep manure contaminates barns, pastures or fields into streams, ponds and groundwater. This means that the environmental burden of MAP steadily increases unless the source (MAP-infected adult sheep) is removed from the flock. For more detailed information on the survival characteristics of MAP see the part of this website called “Biology of MAP”. 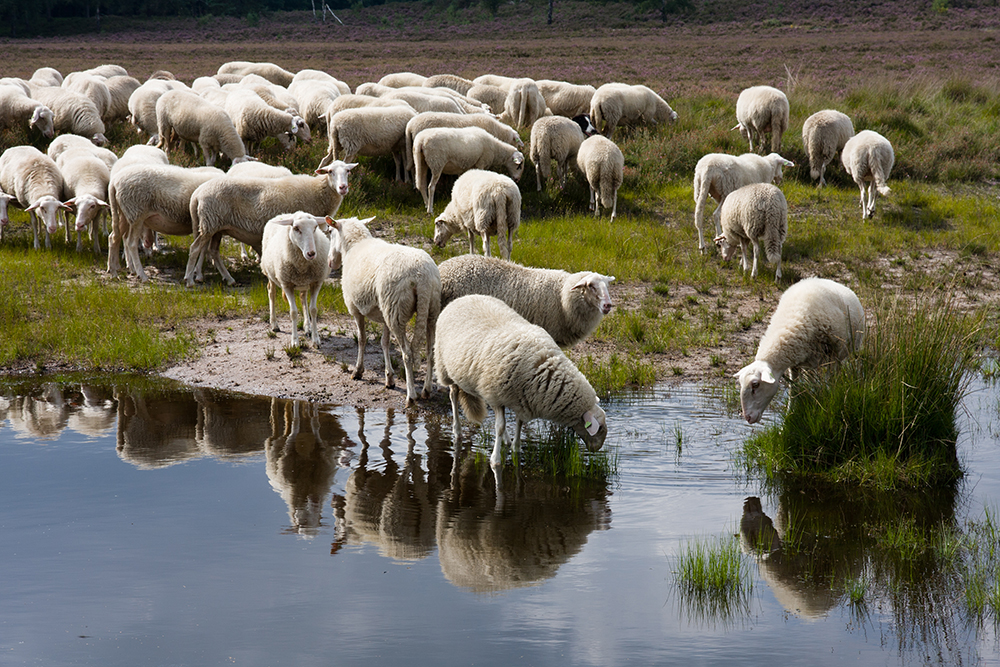 Most MAP transmission occurs from infected adult sheep to young lambs through the fecal-oral route. The organism is swallowed in manure-contaminated milk, water or feed; sometimes manure is swallowed directly. MAP is also shed directly into the milk and colostrum of infected ewes in later stages of infection, providing another route of exposure for susceptible young animals. Pooling of milk from multiple ewes to feed multiple lambs is a significant risk.

Another transmission route is in utero: a fetus may acquire the infection from its infected dam even before it it is born. Australian researchers showed that the likelihood of in utero transmission is high if sheep are sowing clinical signs of Johne’s disease but it is uncommon in sheep that are clinically normal (Lambeth, 2004).

There is no transmission risk of nose-to-nose fence line contact, through sneezed aerosols, or via artificial insemination or natural breeding. The most likely way MAP initially enters a herd is when a silently infected animal is purchased and introduced.

These transmission factors form the basis of MAP infection control: protect the future of your flock (the young lambs) by making sure they are not exposed to potentially contaminated adult manure from potentially infected animals. The extent and duration of exposure to contaminated manure and milk from infected adult animals directly affects the likelihood of sufficient MAP exposure to cause a new case of infection. Clean, dry, birthing environments and housing of young lambs away from the adult herd limits the possibility of infection transmission. Conversely, dirty maternity pens or lots and fecal contamination of feed and water supplies will promote spread of the infection.

The epidemiology of Johne's disease in sheep is like that in most other animals. What owners most need to understand is that Johne's disease is transmitted readily from other MAP-infected ruminants to sheep. Thus, for small hobby owners with multiple ruminants on the farm, it is imperative that all animals be tested for a comprehensive control program.