MAP is naturally resistant to many commonly used antimicrobial drugs.

“In vitro” is a common scientific term, from Latin meaning within glass, essentially meaning studies done in a test tube. The opposite term is “in vivo” (from Latin – “within the living”) means studies done in the whole animal (or human). Susceptibility of bacteria to antibiotics is initially measured by standardized laboratory assays outside of an animal (so called in vitro testing). With these data to guide them, veterinarians or physicians can then choose the antibiotics most likely to be effective when treating an infected animal or person.

It has not been considered economically prudent to treat cases of Johne’s disease using antibiotics. The chances of curing the animal are low, the cost of the drugs is high, the course of treatment is very long (months) and the drugs have not been approved for use in animals meaning that the meat and milk derived from animals treated with the kind of potent drugs required are not suitable for human consumption. Hence, very little research has been done to establish a profile of MAP’s drug susceptibility based on laboratory tests (i.e. in vitro drug susceptibility testing).

The most current and comprehensive evaluation of the in vitro effect of antimicrobial drugs on MAP, of both animal and human-origin, was published in 2009 (Y.K. Krishnan et al. Comparison of three methods for susceptibility testing of Mycobacterium avium subsp. paratuberculosis to 11 antimicrobial drugs. J. Antimicrobial. Chemotherapy. 64(2):310-316, 2009). A summary of her findings is in the table provided here: 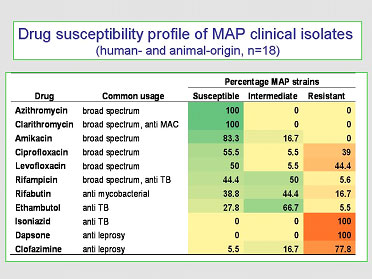 These findings show that:

While these data provide some guidance for antibiotic selection they must be used with caution; it is well known that in vitro tests on mycobacteria are notoriously poor at predicting treatment efficacy in vivo (meaning what is predicted to work based on laboratory tests often fails in patients). With M. avium subsp. hominissuis (MAH) infections the antibiotic treatment success rate is only about 50%.

In vivo trials of anti-MAP therapeutics in animals are few and employed single drugs. Guy St. Jean (Treatment of clinical paratuberculosis in cattle. Veterinary Clinics of North America – Food Animal Practice, 12, 417-430, 1996) has the most extensive review summarizing attempts to treat bovine paratuberculosis, many from personal experience. He concluded that daily isoniazid (20 mg/kg) alone or in combination with rifampin at (20 mg/kg) for the duration of the animal’s life can forestall progression of MAP infections but does not cure them (i.e., when treatment stopped, the cow relapsed) (St Jean 1996). This application is advocated only for animals of high genetic merit for the purpose of harvesting of germplasm (semen and embryos).

Recently, attention has been given to an ionophore antibiotic, monensin, as a possible therapeutic in adult cattle or chemoprophylactic in calves. Monensin is a compound poorly absorbed from the gastrointestinal tract that is used as a feed additive to enhance growth rate and milk production efficiency in cattle. Greenstein and others have shown that monensin inhibits in vitro growth of MAP but found that MAP strains vary widely in monensin susceptibility. Data from in vivo studies has been sparse, but encouraging. Provision of monensin to adult cattle naturally infected with MAP has been associated with modest improvements in histopathology scores (i.e. less tissue damage was seen due to the infection), decline in fecal shedding rate, or reduced odds of testing positive on a milk ELISA. Whitlock et al. reported that monensin used as a chemoprophylactic in calf milk replacer in dairy calves resulted in reduced tissue colonization and MAP fecal shedding.

In summary, antibiotic treatment of selected animals of high genetic value may be attempted to forestall the advancing MAP infection while efforts are made to rescue the genetics of the animal through use of embryo transfer or semen collection. Monensin may have some utility for chemoprophylaxis against MAP infections in calves and/or slowing MAP infection progression in already infected adult cattle.

In humans, there are three independent case reports on treatment of PCR-confirmed MAP infections in individual Crohn’s patients. In the first report an adolescent male was treated with clarithromycin (500 mg/day) and rifabutin (300 mg/day) for 32 months resulting in long term remission of his Crohn’s disease symptoms. In the second report a 21-year-old Canadian male was treated with clarithromycin and rifabutin (dosages not given) for 12 months with marked improvement both clinically and endoscopically. In the third report, a 63 year old male patient with long-standing Crohn’s disease experienced clinical remission of his symptoms after a six month course of treatment with clarithromycin (1,000 mg daily), rifabutin (300-450 mg daily), and levofloxacin (500 mg daily). The patient relapsed, however, after cessation of the antibiotics.

Several therapeutic trials involving Crohn’s disease patients using antimycobacterial drugs yielded conflicting and controversial results. However these cannot truly be considered in vivo anti-MAP trials for two reasons: 1) the MAP status of patients was not determined in any of these trials, and/or 2) most studies used antimicrobials to which MAP is resistant, e.g. trials using anti-tuberculous drugs. Hence, data from most clinical trials using antimicrobials to treat Crohn’s patients are not interpretable regarding MAP susceptibility to drugs in vivo.

For a review of potential MAP involvement in human disease please visit the page of this website called “Zoonotic potential“.