Testing for Johne’s disease can seem complicated. We try here to give some general guidelines but every herd and every owner is different. We urge sheep owners to work with their local veterinarian to find the right testing program for their herd.

There are a number of reasons to test your animals for Johne’s disease? In fact, I think every single sheep flock should be tested. The best test for sheep today is a test for the MAP bacteria in a fecal (manure) sample. Other testing methods are either not sufficiently sensitive or too expensive.

For all diagnostic assays, be sure you and your veterinarian use a laboratory that has voluntarily taken (and passed!) an annual “check test” to confirm that their test kits and methods are valid. The list of laboratories approved by the USDA can be found here. Note: labs are listed by type of test – not all laboratories perform every type of test.

Although PCR on fecal samples is almost invariably the preferred test for use on sheep, we will describe below some of the different testing technologies.

The basics of Johne’s diagnostics

The two primary types of diagnostic tests look for either the organism that causes Johne’s disease (MAP, Mycobacterium avium subspecies paratuberculosis) or the animal’s response to infection by MAP (antibody in the blood).

There are two types of these assays: (1) Culture, which isolates the living MAP organism itself from manure or tissue and (2) PCR, which looks for the MAP genetic material from living or dead MAP.

Conventional culture of MAP from fecal samples on HEY media. MAP colonies on the left. Control medium on the right.

A sample submitted for culture is monitored for eight weeks or longer because MAP is a very slow growing organism. If the sample is heavily contaminated with MAP, a positive result may be had sooner, but it can take two months of incubation or more until the lab feels confident that no MAP organisms are present in the sample tested and can report a “culture negative” result. Culture is effective for testing any animal species and can be done on manure or tissue samples.

Pooling of manure samples reduces the cost of a whole herd test. Individual samples are collected, then the laboratory mixes the samples (usually 5 samples per pool, 1 pool per culture). If a pool is test positive, the 5 animals contributing to the pool are then tested individually to find which one(s) are shedding MAP. Older culture methods used solid culture media that were examined visually on a weekly basis for at least 3 months. Newer methods use liquid culture media and automated instruments to “read” the culture for up to 8 weeks.

Sheep may be infected with the C-strain or the S-strain of MAP. The C strain is more readily cultured than the S strain. For this, and many other reasons, there is no good reason to use culture instead of PCR technology to detect MAP in sheep feces.

This test is used on manure or tissue samples. The assay looks for MAP’s genetic material instead of the living organism. Most labs provide a result in 7-10 days. The accuracy of culture and PCR are comparable. What you get with PCR is usually a lower cost and faster result. 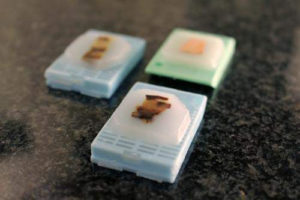 Paraffin block PCR is a special form of PCR that only some laboratories perform. When tissues are collected at a necropsy, they are embedded in paraffin to be thin-sectioned, stained and examined microscopically. The pathologist is looking for characteristic inflammation in tissues and for MAP itself within cells. Your veterinarian can request a PCR test on a portion of the paraffin block.

Most labs also use a PCR to confirm that the organism isolated during culture is actually MAP and not one of its closely-related mycobacterial cousins that live in soil and water.

These assays look for antibody produced by a MAP-infected animal using a technology called ELISA (enzyme-linked immunosorbent assay). ELISAs detect antibodies in serum and the assay is performed in microtiter plates. ELISAs are notorious for having a low diagnostic sensitivity (they detect only a small proportion of the truly MAP-infected sheep).

ELISAs detect antibodies in serum and the assay is performed in microtiter plates. To perform this test, 2-3 milliliters of blood is collected from an adult animal. The fluid part of blood samples (serum) is tested for anti-MAP antibody. The amount of antibody found (if any) is compared with positive and negative controls, and an interpretation is then assigned to the ELISA result. These numeric results (the actual amount of antibody) are useful: the higher the test result, the greater the certainty that the animal is infected and shedding MAP.

The ELISA is designed for testing large numbers of samples quickly (a few days) and this makes it a low-cost test. A number of ELISA kits have been approved for use in milk from individual cows as well as blood samples.

ELISAs are popular because they are fast and the least expensive of the available tests for Johne’s disease. However, they are designed for rapid, low-cost screening of large numbers of animals. ELISAs are less sensitive (more false-negatives) than MAP-detection assays (PCR and culture), typically being positive in roughly 15% of the sheep that MAP-detection assays will identify as MAP-infected. This is partly because antibody production occurs later in the course of a MAP infection, months or even years after an infected animal has been passing MAP bacteria in its feces and partly because of the S-strain of MAP so commonly infecting sheep or the nature of the sheep immune response to MAP infection.

ELISAs are >99% specific. This means that there is a <1% chance that a positive ELISA is a false-positive. Typically, this means that animals found ELISA-positive should have a confirmatory test done by PCR or culture.

In summary, ELISAs are not recommended for sheep in most situations.

The recommended test for sheep is invariably fecal PCR.  However, there are variations in how you apply based on your testing purpose as addressed below.

Question: Is MAP present in my flock?

Recommendation: Use targeted testing by fecal PCR of oldest or thinnest sheep (10% or more of the herd).

Question: How many of my sheep are infected?

Recommendation: A good estimate can be made by PCR testing all sheep, second lambing or older (sample pooling is an option for large flocks).

Question: What test should I use to control MAP in my infected flock?

Recommendation: For commercial flocks, fecal PCR on all sheep second lambing or older is economical if samples are pooled.

Question: What test should I use to eradicate Johne’s disease in my herd?

Recommendation: Breeders must work to eradicate MAP. Pooled fecal PCR is an economic way to eliminate the infection in the flock.

Question: Does this skinny sheep have Johne’s disease?

Recommendation: After ruling our parasites, fecal PCR is best. Even better is necropsy (autopsy) where a pathologist examines the tissues and a microbiologist tried to detect MAP in tissues by PCR.

Question: What test do I need to sell and transport this sheep?

Recommendation: This is determined by the agency managing the shipment or the receiving owner. If I were advising the buyer, I would recommend a test on source flock (all adults or at least 30 head) by fecal PCR (pooling acceptable). Buying young animals from such a flock fairly safe. If the herd owner could show you 3 years of whole-herd negative test results that would be even better. If I were the seller, I might chose a less sensitive test such as a blood test (ELISA) because it is less likely to be positive, even if the flock is MAP-infected.

Sheep are somewhat unique when it comes to diagnostic tests for Johne's disease. Blood tests (ELISA) lack sensitivity and culture of MAP is challenging, if the infecting strain is the "S" (sheep) strain. However, MAP can reliably be detected in sheep feces by PCR and sample pooling is feasible and makes the PCR affordable.