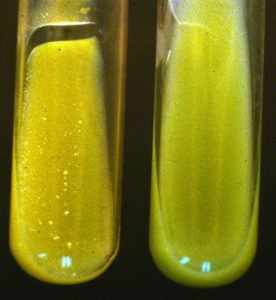 Growing MAP in artificial media made in the laboratory. To culture MAP from clinical samples from animals first requires treatment of the sample to destroy the many other microbes in the sample that could interfere with growth or detection of growth of MAP. In order to ensure that the mycobacteria are not killed off as well, control of contaminating microbes is not always successful. Hence, roughly 5-15% of fecal cultures for MAP become contaminated, that is, are over-grown with other microbes making it impossible to know if MAP was in the original sample. This is one drawback of using this diagnostic method. The other drawback is that the slow growth rate of MAP. On traditional culture media the organism does not produce colonies visible to the unaided eye for 12-16 weeks. An alternative to traditional culture methods on solid culture media are liquid culture systems such as the BACTEC MGIT system or Trek ESP system. Shown on the right is a common solid culture medium, Herrold’s Egg Yolk Agar, with MAP colonies seen in the tube on the left and a control, uninoculated tube, on the right.