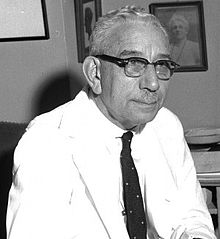 Eighty-nine years ago, Burrill B. Crohn, Leon Ginzburg, and Gordon D. Oppenheimer published a paper titled Regional Ileitis – A Pathologic and Clinical Entity in the Journal of the American Medical Association (vol. 99, no. 16, pp 1323-1329, October 15, 1932). Honoring the importance of this report, the article was later reprinted as a Landmark Article in The Mount Sinai Journal of Medicine (vol 67, no. 3, pp 263-268, May 2006). We provide the original JAMA article here for users interested in reading this influential publication in its original form. Note: the reprinted version in the Mount Sinai Journal of Medicine has better print quality but is more difficult to access. Photo from Wikipedia.

For history buffs, you can read more about the life of B.B. Crohn in an editorial by F. Guilherme published in 2013.

Without providing much detail, B.B. Crohn’s article mentions efforts to determine if Mycobacterium tuberculosis was involved in the regional ileitis cases he described including culture for M. tuberculosis, inoculation of lymph node homogenates from five patients into guinea pigs, rabbits, and chickens, and acid-fast staining of tissue sections. He concluded that M. tuberculosis was not a cause of these cases of regional ileitis. However, he never mentions the 1913 report by Dalziel or makes any mention of Mycobacterium paratuberculosis or the similarities of regional ileitis in humans to that of cattle, as described by H.A. Johne in 1895. Clearly, Dr. Crohn recognized how the pathology in his afflicted patients resembled that caused by a mycobacterial infection. How might history be different had Dr. Crohn considered the possibility M. a. paratuberculosis (MAP) was the cause? Paratuberculosis (pTB), also called Johne’s disease, is regional ileitis in animals and MAP is the cause.

The tide of medical opinion maybe gradually changing. An editorial by Dr. Giles R.G. Monif, published in the journal Gastrointestinal Disorders, states that Crohn’s disease, caused by MAP, is both preventable and curable if treated appropriately in its early stages. I urge you to read Dr. Monif’s article.

For an overview of research linking MAP with Crohn’s disease see the page on this site called Zoonotic Potential.