M.S.A. Faruk and colleagues from the Department of Animal Science and Technology, Sunchon National University in Korea describe a novel study on the kinetics of antibody production in dairy cattle. The article is titled: Longitudinal Study of Mycobacterium avium Subsp. paratuberculosis Antibody Kinetics in Dairy Cattle Using Sera and Milk throughout the Lactation Period and was published in the journal Veterinary Sciences 30 June 2020.

Mycobacterium avium subsp. paratuberculosis (MAP) is the causative agent of Johne’s disease in dairy cattle populations around the world. The objective of this study was to evaluate MAP antibody kinetics in serum and milk samples throughout the lactation period in dairy cattle. The samples were collected simultaneously from eight MAP-positive and two healthy MAP-negative (control group) cows. The MAP antibody was detected by using serum and milk ELISA. The serum and milk MAP antibody titers fluctuated between the positive and negative cut-off values in this study. Specifically, cattle with low MAP antibody titer (<100) showed fluctuation between the cut-off values. Variable changes of MAP antibody titer were also observed after parturition. Between the serum and milk MAP antibody titers, there was a positive correlation (R2 = 0.5358) observed throughout the assessment period. The milk MAP ELISA test had low diagnostic performance in cows with low MAP titer due to its weak correlation (R2 = 0.0198). Finally, this study suggest that the periodic MAP ELISA test is recommended for the application of Johne’s eradication program due to the fluctuating nature of MAP antibody kinetics. 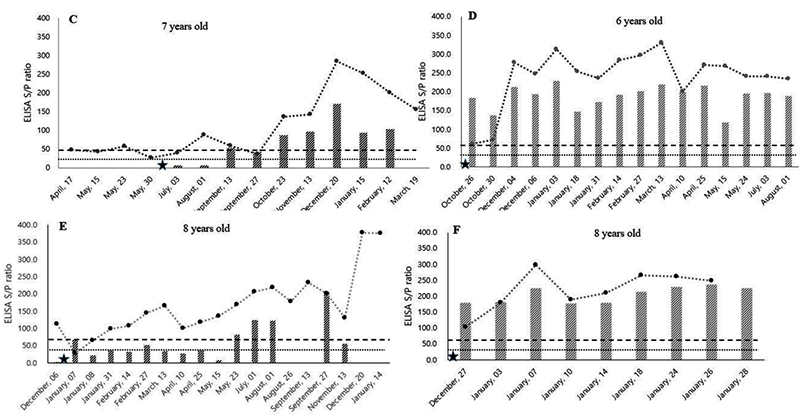 Conclusions of the authors

Comment: Only 8 cows were included in the study and the authors state that they were “diagnosed as MAP-positive during the screening period”. It seems that the 8 cows were only selected based on ELISA results and did not have a paratuberculosis diagnosis confirmation by fecal PCR or culture. Without confirmation by MAP detection technology it remains unproven if all 8 cows were MAP-infected. As previously shown for serum ELISAs, the higher the ELISA S/P values the greater the confidence in the diagnosis (Collins-5_ELISA_Evaluation).