S. Patterson and colleagues in the UK reported on the impact of a dairy cow’s Johne’s ELISA status on the likelihood her calf will also be MAP-infected (ELISA-positive). Their study is reported in the journal Preventive Veterinary Medicine (in press, corrected proof, available online – not Open Access). 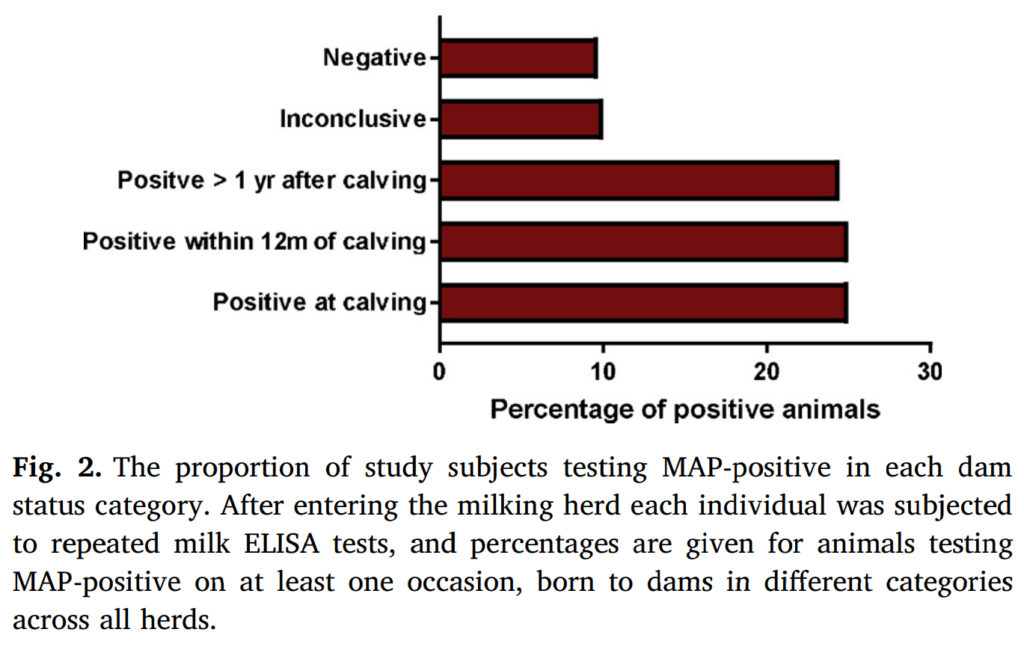 Johne’s disease, caused by Mycobacterium avium subsp. paratuberculosis (MAP), is a chronic condition of dairy cattle, and is endemic in the UK. Lack of understanding of the relative importance of different transmission routes reduces the impact of control scheme recommendations.

The long incubation period for Johne’s disease makes evaluation of control schemes difficult, and so this long-term cohort study offers a rare and valuable insight into the disease epidemiology. A longitudinal study was carried out following a cohort of 440 UK dairy cows in 6 herds recruited in 2012-2013. Individuals entering the milking herd were routinely monitored for the presence of MAP using quarterly milk ELISA testing. Using a Cox proportional-hazards regression model the relationship between time until first detection of infection and dam MAP status was investigated. We then compared the magnitude of the effect of dam status with that of other risk factors in order to understand its relative importance.

Dam status was found to be the only observed factor that was significantly associated with time to an individual testing MAP-positive (p = 0.012). When compared to negative dams, we found a marginally significant effect of having a positive dam at time of calving, that increased the hazard of an individual testing positive by a factor of 2.6 (95% confidence interval: 0.89–7.79, p = 0.081). Further positive associations were found with dams becoming positive after the birth of the subject; a dam seroconverting within 12 months post parturition being associated with a 3.6 fold increase in hazard (95% confidence interval: 1.32–9.77, p = 0.013), and dams seroconverting more than a year after calving increased the hazard by a factor of 2.8 (95% confidence interval: 1.39–5.76, p = 0.004).

These results suggest that cows may be transmitting MAP to their offspring at an earlier stage than had previously been thought, and so raise important questions about how this transmission may be occurring. The results of the study may have important practical implications for the management on-farm of the offspring of MAP-positive animals, with the potential to vastly reduce the time required to eliminate this chronic disease.

Comment: For faster control of Johne’s disease in dairy herds it is advisable to tell herd owners not to retain as herd replacements any heifer born to a cow that tests positive for Johne’s disease. This study supports that recommendation (using ELISA as the Johne’s disease test) and extends it to include calves born to cows that test positive AFTER calving. Not culling calves born to test-positive dams will result in more MAP-infected heifers entering the herd as replacements and then infecting more calves thereby slowing progress of a control program. That said, in my experience it is difficult enough to get herd owners to act on positive test results on cows, much less act on the probabilities that their calves are also infected. Hopefully, this report and others like it will help to strengthen culling recommendations to include calves born to ELISA-positive dams resulting in more successful control of Johne’s disease in dairy herds.