This question was recently submitted to our website’s “Ask and Expert” feature: 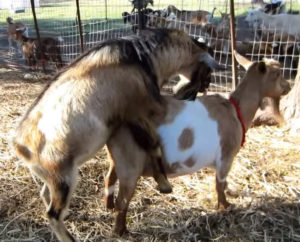 “I have a goat buck who has tested positive for Johne’s. If the diagnosis is confirmed, is it OK to collect his semen to store and use for AI purposes? Or can it spread the disease? Should I wait a couple of years before using it to be sure that it is safe?”

How would you answer this goat owner?

There are many reports that bulls (bovine) infected with MAP have the organism in their semen and accessory sex glands. Research publication examples include the following:

While it seems that there is consensus that MAP is found in the semen of infected bulls, a search of scientific literature indicates that only Dr. Richard Merkal tackled the question of what the consequences are for the cow inseminated with MAP-contaminated semen (RS Merkal. Intrauterine inoculation of Mycobacterium paratuberculosis into guinea pigs and cattle. Am. J. Vet. Res. 43:676, 1982).

Comment: In my answer to the goat owner’s question I explained that I was not aware of any research that directly addressed this question in goats but that I did have information on cattle (some cited above). Based on this, I suggested that the semen itself was probably of minimal concern: best summarized as “wrong end & wrong age”.  I also explained that the feces of the infected buck were of greater concern.

Although Merkal’s study raises some concerns, the uterus is the wrong end (oral being the preferred route of infection by MAP) and only adult (post-puberty) animals are inseminated and as such are more resistant to MAP infection than young animals, i.e. wrong age.

However, I think this highlights a knowledge gap in our understanding about Johne’s disease. This has major significance for the artificial insemination (AI) industry and for countries like Sweden that are free of MAP infections in cattle and risk importation of the infection.  And, we obviously know even less about MAP in goat bucks.