Mariana Assunção de Souza and 6 other Brazilian colleagues reported on the occurrence of Johne’s disease (paratuberculosis) in cattle that were necropsied based on a positive comparative cervical skin test for bovine tuberculosis (bTB). Their research article appears in the current issue of Acta Scientiae Veterinariae.

Background: Bovine tuberculosis control programs are based on a standard diagnostic method, the intradermal test with purified protein derivatives, which is used to identify and eliminate diseased animals. Currently none of the tests available allow complete differentiation between infected and uninfected animals. The main limitations of the tests available are related to diagnostic sensitivity and specificity, which results in false-positive reactions due to the existence of cross infections, and also false-negative, inherent to the state of energy of some animals. The aim of this work was to study the intercurrence of paratuberculosis in tuberculosis reactive cattle by the comparative cervical test.

Materials, Methods & Results: Three hundred and thirty-four cattle were evaluated using the comparative cervical test (CCT) and serology for tuberculosis (TB) and paratuberculosis (PTB) ELISA IDEXX®. All of the animals testing positive by CCT were euthanized and necropsied. Fragments of lymph node, lung and intestine were collected and analyzed using histopathological techniques, with staining by Hematoxylin-Eosin (HE). Samples of lung and lymph nodes (retropharyngeal, submandibular, cervical and mediastinal) of the animals testing positive by CCT were evaluated using qPRC for M. bovis, and intestinal and mesenteric lymph nodes using PCR for PTB. Of the 334 cattle evaluated using the comparative cervical test, 16 were considered positive. No lesions suggestive of tuberculosis were found in the macroscopic inspection of the carcasses. The most evident anatomical and pathological finding was a thickening of intestinal mucosa, found in 12 of the 16 cattle submitted to necropsy. No microscopic lesions suggestive of TB were identified nor was the presence of M. bovis detected by qPCR. The main histopathological findings were observed in the small intestine and mesenteric lymph nodes and identified as enteritis, lymphangitis, lymphangiectasia and granulomatous lymphadenitis. In the intestine the changes are characterized by dilated and inflamed lymphatic vessels and intense inflammatory infiltrate on the mucosa and submucosa. Of the 334 serum samples evaluated, the M. bovis ELISA Antibody Test (IDEXX®) identified 17 positive animals. All the cattle considered positive by M. bovis ELISA were considered negative by CCT. In the samples from nine animals (9/16), DNA from M. avium subsp. paratuberculosis (MAP) was identified and in twelve carcasses (12/16) lesions characteristic of PTB were found, which were subsequently confirmed by histopathological techniques. In another nine animals of the herd anti-MAP antibodies were detected. None of those that tested positive by PTB ELISA were reactive by CCT. 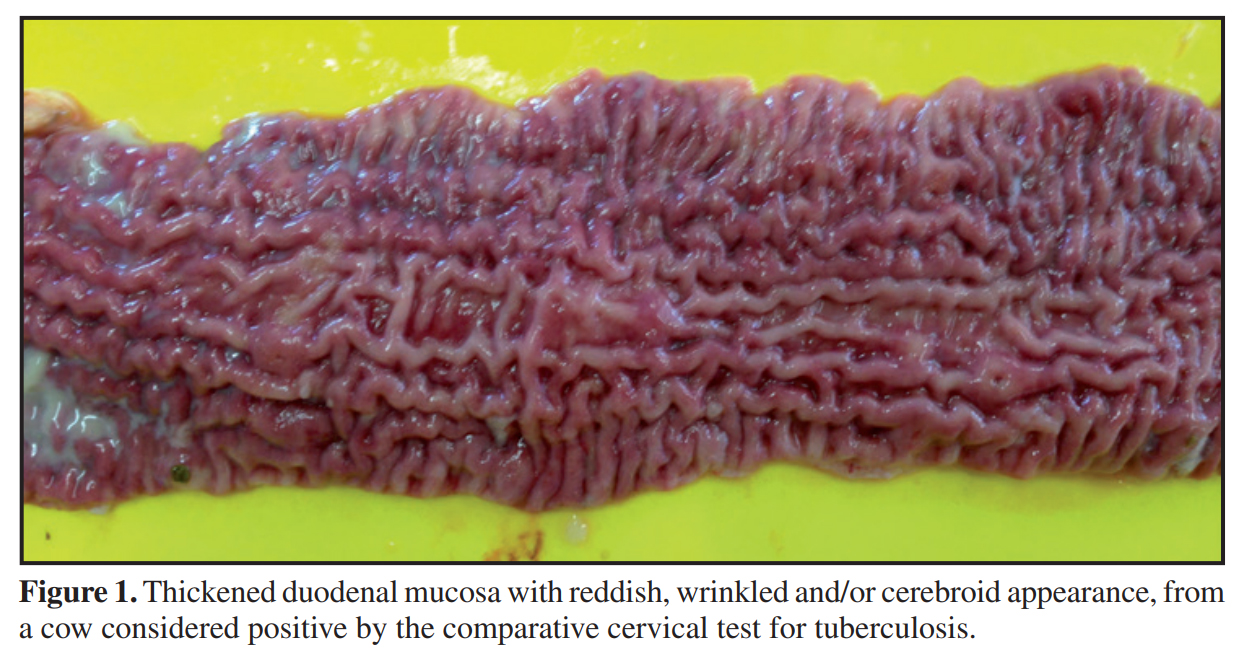 Discussion: Animals considered positive by TB ELISA that were not positive in the intradermal test does not mischaracterize the clinical picture of the disease. Considering the inverse relationship between cell-mediated and humoral responses to M. bovis, the intradermal test and the serological tests are designed to measure different immunological responses, which develop during different stages of infection. The progress of the cellular immunological response to humoral immunity occurs in the most advanced stages of tuberculosis. Of the 16 cattle considered positive by CCT, 12 animals presented macroscopic and histological lesions suggestive of PTB and DNA from MAP was detected in nine. Although it is the official test for the control of TB in different countries, the intradermal test with PPD has presented limitations, primarily related to specificity. M. avium subsp. Paratuberculosis is considered the main cause of false positive reactions in the intradermal test. The PPD bacterial extract is a complex mixture of proteins, lipids, sugars and nucleic acids, and many of these components are also shared by numerous species of mycobacteria (tuberculous or not).

The Brazilian study illustrates the interaction of MAP and M. bovis, the cause of bovine tuberculosis (bTB), as a confounder when trying to use standard immune-diagnostic tests for bTB. Other authors have found similar results. Out October 30 news posting on this site discussed the need to wait at least 60 days after skin testing cattle for bTB before using serological tests (ELISA) for Johne’s disease (JD) in order to avoid false-positive JD blood tests.

In a different but related context, other authors have likewise noted this interaction between mycobacterial diseases such as TB, leprosy and those caused by non-tuberculosis mycobacteria (NTM). The most common NTM infections are due to bacteria in the Mycobacterium Avium Complex (MAC) which includes the cause of JD, i.e. MAP.

In a letter published in the journal Inflammatory Bowel Diseases in 2008, Dr. Marcel Behr from McGill University Health Centre, Montreal, Canada highlighted instances where one mycobacterial infection interferes with another. One example he cited is that TB and leprosy (caused by Mycobacterium leprae) behaved as antagonistic epidemics – one infection blocks the other. When human TB is controlled, as it has in most developed countries, and when BCG vaccination of humans stops, other mycobacterial infections rise in prevalence. The theory is that the absence of one mycobacterial infection, e.g. TB, causes an “immunological void”, i.e. an increased susceptibility of humans to other mycobacteria that now find more susceptible, immunologically naïve, hosts. Note: BCG is a live non-virulent vaccine used to control TB in humans in countries where the disease is endemic. This vaccine was originally derived from M. bovis.

Because MAP is strongly associated with Crohn’s disease, Dr. Behr noted that Crohn’s disease (CD) was more common in countries where TB was less common. Below is the graphic he published illustrating inverse association between TB incidence and CD incidence. This is yet another piece of evidence for mycobacterial, e.g. MAP, involvement in CD.

Related to this is the review article by Dr. Dow (15 pages with 173 references) published in February 2020 on the influence of BCG vaccination on a variety of autoimmune diseases. In that article he states: “MAP has been associated with an increasingly long list of inflammatory/autoimmune diseases: Crohn’s disease, sarcoidosis, Blau syndrome, Hashimoto’s thyroiditis, autoimmune diabetes (T1D), multiple sclerosis (MS), rheumatoid arthritis, lupus and Parkinson’s disease. Epidemiologic evidence points to BCG providing a “heterologous” protective effect on assorted autoimmune diseases; studies using BCG vaccination for T1D and MS have shown benefit in these diseases.” His article proposes that the positive response to BCG in T1D and MS is due to a mitigating action of BCG upon MAP infections.

For more on the potential of MAP to cause Crohn’s disease visit this page of our site. Or listen to a 10-minute presentation titled: MAP is a zoonotic pathogen.