“If I have seen further than others, it is by standing on the shoulders of giants” (Isaac Newton). 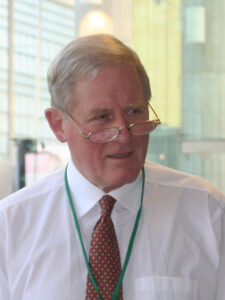 John had the highest scientific standards and was a most collegial and supportive colleague. John Aitken, New Zealand MAP researcher, posted a beautiful memorial on the Human Para Foundation website. Expanding on what John Aitken wrote, I am amplifying John Hermon-Taylor’s legacy here by highlighting some of his many influential publications with links to the complete articles.

In his own words:

“In 1990, after spending 20 months carefully optimising [sic] sample processing and experimental procedures, we began a study which revealed the presence of MAP DNA in about two-thirds of people with Crohn’s disease using IS900 PCR (Gut, 1992). This verified and expanded the work of earlier investigators. Note: IS900 PCR is widely used to diagnose Johne’s disease in animals.

In 1996, along with colleagues at St. George’s Hospital and Medical School, John demonstrated that MAP can be found alive in retail pasteurized milk, thereby explaining how the public can be exposed to MAP and alerting the world to an emerging food safety problem (Appl. Env. Microbiol., 1996).

In June 2000, John published a review article titled: Causation of Crohn’s disease by Mycobacterium avium subspecies paratuberculosis (Can. J. Gastroenterol, 2000; 19 pages with 369 references). In this publication John laid out the hypothesis that MAP is a cause of Crohn’s disease and clearly documented its rational basis. He followed this quickly with an article in the journal Food Control highlighting that MAP is a food safety issue (Food Control, 2001).

John then published an editorial in the journal Digestion and Liver Diseases titled: Treatment with drugs active against Mycobacterium avium subspecies paratuberculosis can heal Crohn’s disease: more evidence for a neglected public health tragedy (Digest. Liver Dis., 2002). He was tireless in trying to change the thinking of gastroenterologists about the causes of Crohn’s disease and warn the public about the food safety concerns.

Between 1997 and 2007, John developed a modern therapeutic vaccine against MAP (together with Dr Tim Bull at St George’s and Prof. Sarah Gilbert at Oxford University) designed to treat Crohn’s disease. John believed that the MAP vaccine holds the best hope of Crohn’s cure we have ever had (PLOS ONE, 2007). Work on the vaccine continues under the direction of Dr. Amy Hermon-Taylor, John’s daughter. The vaccine is now in clinical trials.

I will miss John’s smile and gentle nature and his glasses perpetually perched on the end of his nose. His important contributions to the fields of paratuberculosis and Crohn’s disease will undoubtedly endure.

108 years ago today appeared a 3 page report by T.K. Dalziel in the British Medical Journal (vol. 2, no. 2756, pp 1068-1070, October 25, 1913) that is widely regarded as the first report of the chronic inflammatory intestinal condition that is now called Crohn’s disease. He mentions the gross and microscopic similarities of the intestines he removed from patients with those from cases of Johne’s disease in cattle. He mentions the 1895 work of Dr. Johne (misspelled as Henny) and Dr. Frothingham and cites the early work on the Johne’s disease pathology by Dr. McFadyen.