Dr. C.T. Dow has published a thought-provoking article (11 pages with 169 references) proposing that the inflammatory response to a MAP infection of humans could lead to Alzheimer’s disease. The article appears in the August issue of Frontiers in Immunology. 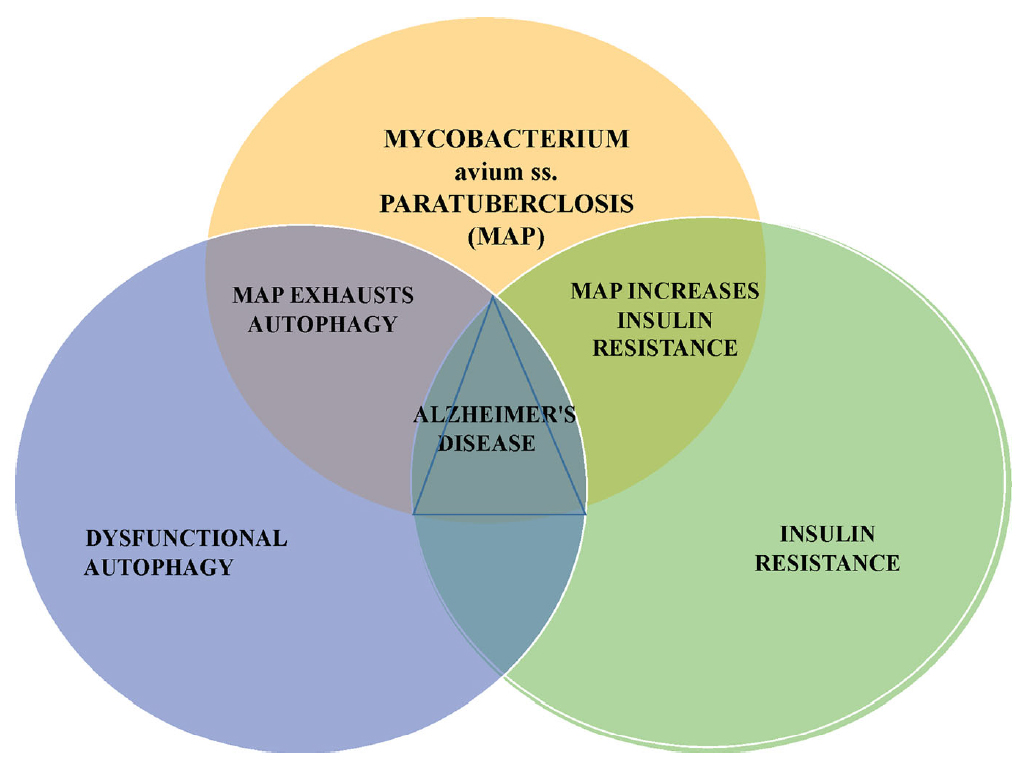 This article prosecutes a case against the zoonotic pathogen Mycobacterium avium ss. paratuberculosis (MAP) as a precipitant of Alzheimer’s disease (AD). Like the other major neurodegenerative diseases AD is, at its core, a proteinopathy. Aggregated extracellular amyloid protein plaques and intracellular tau protein tangles are the recognized protein pathologies of AD. Autophagy is the cellular housekeeping process that manages protein quality control and recycling, cellular metabolism, and pathogen elimination. Impaired autophagy and cerebral insulin resistance are invariant features of AD. With a backdrop of age-related low-grade inflammation (inflammaging) and heightened immune risk (immunosenescence), infection with MAP subverts glucose metabolism and further exhausts an already exhausted autophagic capacity. Increasingly, a variety of agents have been found to favorably impact AD; they are agents that promote autophagy and reduce insulin resistance. The potpourri of these therapeutic agents: mTOR inhibitors, SIRT1 activators and vaccines are seemingly random until one recognizes that all these agents also suppress intracellular mycobacterial infection. The zoonotic mycobacterial MAP causes a common fatal enteritis in ruminant animals. Humans are exposed to MAP from contaminated food products and from the environment. The enteritis in animals is called paratuberculosis or Johne’s disease; in humans, it is the putative cause of Crohn’s disease. Beyond Crohn’s, MAP is associated with an increasing number of inflammatory and autoimmune diseases: sarcoidosis, Blau syndrome, autoimmune diabetes, autoimmune thyroiditis, multiple sclerosis, and rheumatoid arthritis. Moreover, MAP has been associated with Parkinson’s disease. India is one county that has extensively studied the human bio-load of MAP; 30% of more than 28,000 tested individuals were found to harbor, or to have harbored, MAP. This article asserts an unfolding realization that MAP infection of humans 1) is widespread in its presence, 2) is wide-ranging in its zoonosis and 3) provides a plausible link connecting MAP to AD.

(excerpt from the discussion section of the article)

This article suggests steps to further investigate this potentially fertile line of inquiry: 1) determine population-based MAP “bio-load”, 2) use optimized blood-based biomarkers to determine AD risk, 3) test for MAP in those with elevated AD risk vs. healthy controls. Concurrently, interventions could be initiated to 1) eliminate MAP from animals, the environment, and the food chain, 2) initiate clinical trials to test iterations of anti-mycobacterial agents shown to have benefit for AD. Parsimoniously, when searching for new directions in the efforts against AD, look at the MAP.