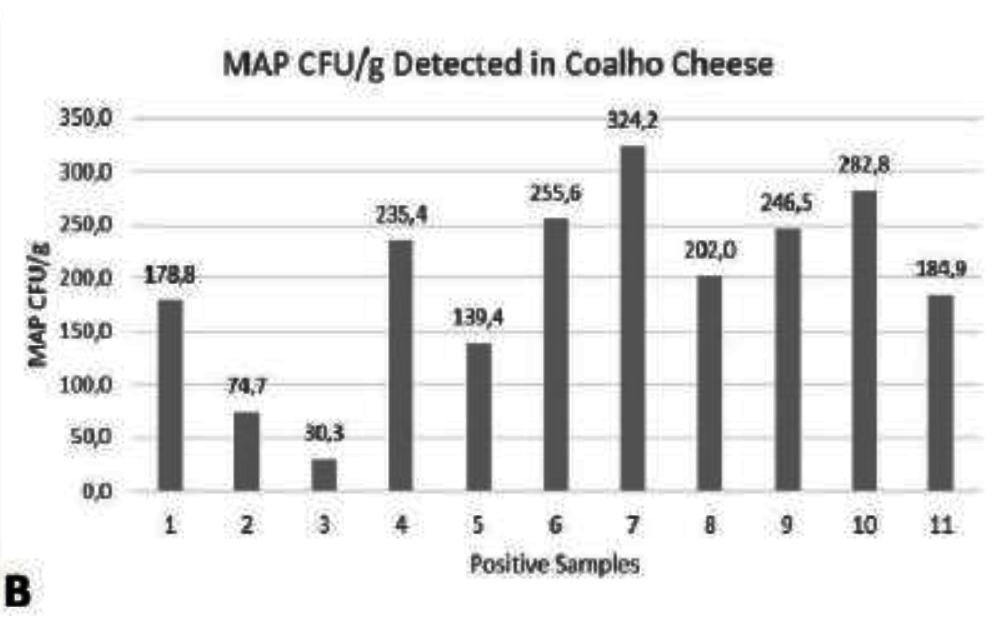 Paratuberculosis is a chronic and incurable disease that affects ruminants and other domestic animals. It is caused by Mycobacterium avium subsp. paratuberculosis (MAP) that may also be involved in some human diseases such as Crohn’s disease, type 1 diabetes, sarcoidosis, multiple sclerosis, and Hashimoto’s thyroiditis. The objective of this study was to investigate the occurrence of MAP DNA in samples of artisanal coalho cheese purchased in the State of Pernambuco. Forty samples of coalho cheese submitted to the Real Time Polymerase Chain Reaction (qPCR) technique were analyzed for the detection of the MAP region IS900. 11 (27.5%) were positive with a mean of 195.9 MAP colony forming unit (CFU) per gram of each sample, with a minimum of 30.3 CFU/g and a maximum of 324.2 CFU/g. Thus, this type of cheese that is one of the most consumed in this region of Brazil constitutes a source of human exposure to MAP. Further research in this area should be performed to evaluate the viability of the bacteria in this cheese type.

Comment: It should be noted that MAP numbers (CFU) were actually based 10-fold serially diluted MAP DNA used to obtain the standard curve, in which it was possible to detect from 21 up to 2.12 x 107 MAP cells. In my opinion a more informative titration curve (MAP CFU vs qPCR Ct values) would begin with known CFU/mL MAP suspensions that were then processed by DNA extraction followed by qPCR. Only then can an investigator truly know the net results of both DNA extraction and target IS900) amplification to estimate the CFU of MAP in the original sample.  That said, most molecular biologists opt for titration of extracted DNA as the authors of this study did.

The last line of the abstract is the critical one. The really big question is: Are the detected MAP alive or dead. That said, some investigators postulate that dead MAP may function as a dietary allergen triggering inflammation in the absence of infection. MAP as a food safety threat is a critical knowledge gap urgently requiring research.