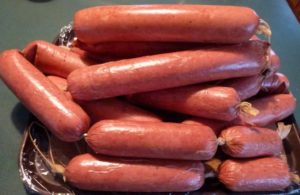 Teewurst is a traditional raw spreadable sausage of German origin that can be prepared from pork, beef as well as poultry meat. It has a short ripening process (1–5 days) at high humidity and relatively high moisture content. Even if no additional sugar and starter cultures are added, the final pH value drops below 5.2 which should ensure microbiological safety of the product. However, the results of a study (in press) reported by Alena Lorencova et al. from the Food and Feed Safety Department, Veterinary Research Institute, Brno, Czech Republic in the journal Meat Science demonstrated that the production process was not effective at inactivating MAP. Despite a significant decline during storage, viable MAP cells were present in teewurst for up to 4 weeks after production.

In contrast to teewurst, no viable MAP were recovered during the dry fermented sausage production process. The effect of starter culture (Lactobacillus sp. and Staphylococcus sp.), and lower moisture content, may have played roles in the inhibition of MAP. Starter cultures are necessary for fermentation and contribute to the sausage acidification and color and flavor development.

For more on the many kinds of sausages available worldwide, visit Wikipedia.

Comment: This study was NOT a survey of retail sausages. Rather, it was a laboratory experiment using MAP-spiked meat to prepare sausage and study MAP survival. The study yet again proves that MAP is very hardy. It does not indicate that MAP is in retail teewurst. Prior publications from this research team have documented MAP DNA in retail sausages but found no viable MAP using culture methods.