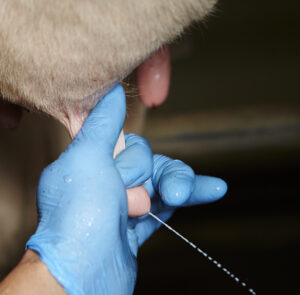 Two excellent articles about use of the ELISA diagnostic test on milk samples (milk ELISA) appeared in the past few weeks. The first, by Ozsvari and colleagues uses the milk ELISA to evaluate the impact of paratuberculosis on milk production, fertility, and culling in large commercial dairy herds in Hungary.  This article published in Frontiers in Veterinary Science is Open Access. 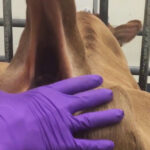 The second publication is by Barden and colleagues from the U.K. describes the effect of skin testing for bovine tuberculosis (TB) on milk ELISA results.  This article published in the journal Preventive Veterinary Medicine is available online only until November 29.

Background: In the UK, quarterly Johne’s disease milk antibody ELISAs (JD-mELISAs) are commonly used to classify animals which are likely to be infectious, termed “red cows”. “Red cows” are classified following two positive results from the previous four tests (e.g. + – – +). All cattle are also regularly screened for bovine tuberculosis using intradermal avian and bovine tuberculin, and it is advised to maintain a 60 day interval between a tuberculosis test and JD-mELISA. Aims: To evaluate the impact of bovine tuberculosis testing on JD-mELISAs, and to quantify the impact of test specificity and “red cow” classification test pattern on the probability of infection.

Methods: Four years of individual cow milk records with JD-mELISA results were collated from 735 dairy farms and matched to tuberculosis testing records. A two-level multivariable logistic regression model quantified the effect of tuberculosis testing on JD-mELISA result. The specificity and age-dependent sensitivity of a single JD-mELISA were estimated and used to calculate likelihood ratios following each test. Using Bayes’ theorem, the posterior probability of infection with Johne’s disease was calculated for different specificities, ages of cow, and patterns of test results.

Conclusions: Testing for Johne’s disease within 60 days of a tuberculosis test is associated with a higher chance of a positive JD-mELISA and this may reflect a reduction in the ELISA specificity. Relatively small reductions in JD-mELISA specificity can markedly reduce the posterior probability of infection which also depends on the pattern of test results which classifies “red cows”. [Red cows are those with 2 consecutive positive milk ELISA tests.]

Comment: The milk ELISA is the most affordable testing option for commercial dairy cattle herds. It primarily identifies cows in the more advanced stages of a MAP infection. As the Ozsvari study shows, milk ELISA-positive cows are those that are less productive and likely to be culled sooner (160.5 days earlier) that their milk ELISA-negative herdmates. In countries with endemic bovine TB, where TB testing of cattle happens regularly, it is important to avoid use of the milk ELISA for at least 60 days after a whole herd TB skin test. TB skin testing seems to increase the rate of false-positive test results (decreases assay specificity).

Milk ELISA testing importantly makes JD control more affordable and thus increases producer participation in national programs like the one in the U.K. However, limitations in diagnostic sensitivity mean that while it is a useful tool for controlling MAP-infections in dairy cattle herds it is not sufficiently sensitive to drive eradication of the infection from herds. For that purpose, more sensitive tests, such as the fecal PCR, are required.