Australian veterinary scientists report studies to define the optimal number of fecal samples from beef cattle that can be pooled for MAP detection by fecal PCR. Their findings were published in PLoS ONE and the article is Open Access [18 pages with 42 references]. This was mentioned in last weeks news posting but I feel it deserves more explanation.

Bovine Johne’s disease (JD) is a chronic debilitating disease affecting cattle breeds worldwide. Pooled faecal samples are routinely tested by culture to detect Mycobacterium avium subsp. paratuberculosis (Mptb) [also called MAP] infection. More recently, a direct high throughput molecular test has been introduced in Australia for the detection of Mptb in faeces to circumvent the long culture times, however, the optimal pool size for beef cattle faeces is not known. This study aimed to determine the optimal pool size to achieve the highest test sensitivity and specificity for beef cattle. Individual archived faecal samples with low, medium and high quantities of Mptb (n = 30) were pooled with faecal samples from confirmed JD negative animals to create pool sizes of 5, 10, 15 and 20, to assess the diagnostic sensitivity relative to individual faecal qPCR. Samples from JD-free cattle (n = 10) were similarly evaluated for diagnostic specificity. Overall, 160 pools were created, with Mptb DNA extracted using magnetic bead isolation method prior to Mptb-specific IS900 quantitative PCR (qPCR). The pool size of 10 yielded the highest sensitivity 73% (95% CI: 54–88%), regardless of the quantity of Mptb DNA present in the faeces. There was no significant differences between the four different pool sizes for positive pool detection, however, there was statistical significance between low, medium and high quantities of Mptb. Diagnostic specificity was determined to be 100%. The increase in pool size greater than 10 increased the chances of PCR inhibition, which was successfully relieved with the process of DNA dilution. The results of this study demonstrate that the pool size of 10 performed optimally in the direct faecal qPCR. The results from this study can be applied in future simulation modelling studies to provide suggestions on the cost-effective testing for JD in beef cattle.

Comment: Dr. Kees Kalis (2000) also showed that pooling of 5 fecal samples was effective when using culture as the diagnostic test. Kalis also noted that “strategic pooling” can further enhance the procedure. Strategic polling refers to grouping animals of the same or similar ages into the same pools.

A study on fecal sample pooling by Wells et. al. (2002) using artificially constructed pools of feces from dairy cattle showed that 5 samples per pool was only slightly better than 10 samples per pool, when using culture of MAP on solid media as the diagnostic test. The standard protocol for sample pooling in the U.S. has remained at 5 per pool ever since.

The Australian study used a much larger number of samples, they originated from naturally infected beef cattle, and the diagnostic assay was the high throughput PCR (Plain, 2014). The ability to pool 10 samples instead of 5 obviously decreases the laboratory costs for the producer by half with apparently little or no loss in diagnostic accuracy. If widely adopted, this would encourage more testing and verification of cattle herds that are not MAP-infected which then would be preferred sources of replacement cattle. These cattle could sell at premium prices thus allowing the herd owner to recoup the costs of attaining a test-negative status.

Australia has been using fecal sample pooling for sheep since 2000 finding that fecal pellets from 50 sheep can be combined into a single pooled test without significant loss in MAP infection detection at the flock level (Whittington, 2000).

Due to lack of funding, few cattle herds currently participate in the US. JD program (formally called the Voluntary Johne’s Disease Herd Status Program (VJDHSP). Thus, for herd owners simply wanting the least cost JD surveillance program, without concern for formal USDA recognition of the herd JD status, then it makes sense to use the 10 fecals/pool testing scheme.

Lastly, samples should be carefully collected, packaged and shipped refrigerated to the lab. The containers should seal tightly to prevent leakage.  Below is an example of how NOT to send fecal samples.  These snap-top containers were filled too full and not refrigerated causing gas to be produced popping the tops off the containers making for a poopy mess and cross-contamination of samples rendering them useless. The photo above shows well-collected and labeled bovine fecal samples in Whirlpack bags. 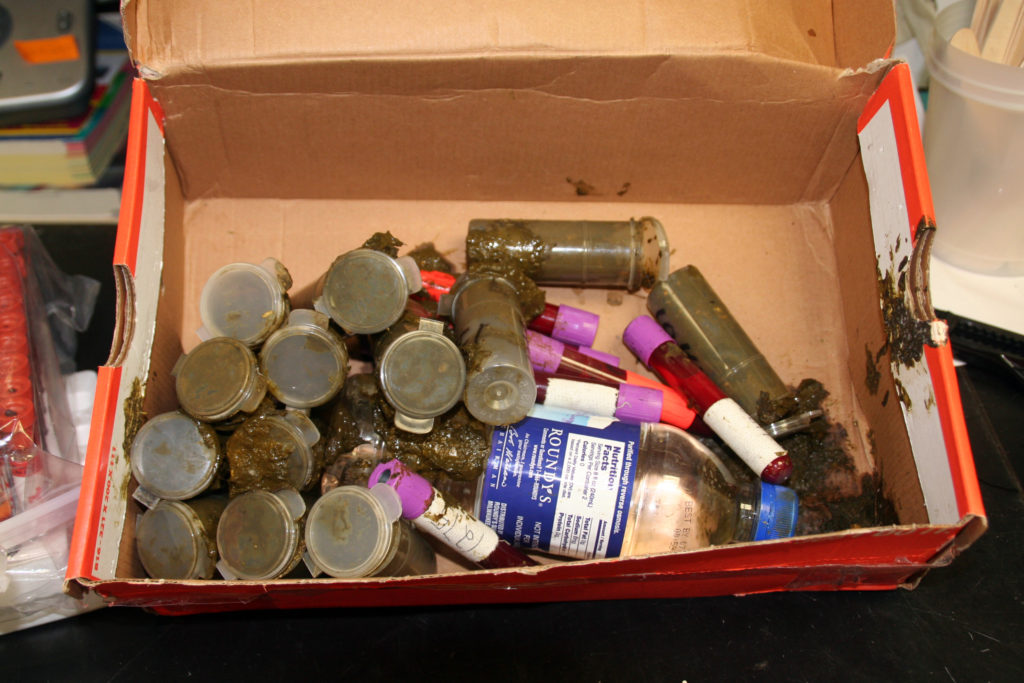