Background: Crohn’s disease (CD) is rising in incidence and has a high morbidity and increased mortality. Current treatment use immunosuppressives but efficacy is sub-optimal, and relapse is common. It has been shown that there is an imbalance present in the gut microbiome (dysbiosis) in CD with a possible infective aetiology—Mycobacterium avium subsp. paratuberculosis (MAP) being the most proposed.  Antibacterial therapy and Faecal Microbiota Transplantation (FMT) are emerging treatments which can result in clinical and endoscopic remission, if employed correctly. The objective of this study was to report on the treatment and clinical outcomes of patients with CD in prolonged remission.

Results: Ten patients were identified to have achieved prolonged remission for 3–23 years (median 8.5 years). Of these, 7/10 took targeted Anti-MAP therapy (AMAT) for a median 36 months and then ceased AMAT treatment. After stopping AMAT five patients underwent Faecal Microbiota Transplantation (FMT) (average four infusions). In 4/7, AMAT was combined with infiximab (mean of six infusions) that was withdrawn within 6 months after fistulae resolution. One patient achieved deep mucosal healing with AMAT alone. Of the 3/10 patients not prescribed AMAT, one had a combination of anti-inflammatory agents and a single antibiotic (metronidazole) followed by FMT. The other two received only FMT for Clostridioides difficile Infection.

Conclusions: Prolonged remission has been achieved for 3–23 years with individualised treatments, with the majority using AMAT ± infiximab and FMT. Treatment with antibiotics and/or FMT provides a potential new avenue for treatment of CD. These findings should stimulate thinking, investigations and better therapy against MAP and the dysbiosis of the gut fora, to enable higher rates of prolonged remission.

These endocsopy images from before and after treatment from Dr. Agrawal’s article offer convincing evidence. 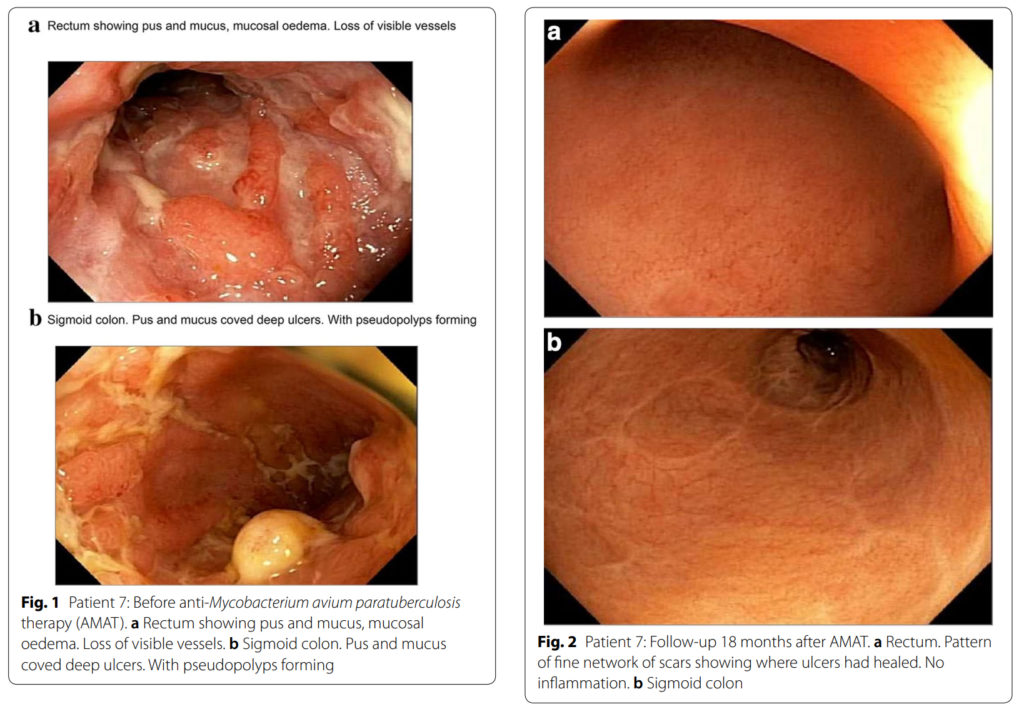 Comment: Here’s a short list of published findings implicating MAP, the accepted cause of Johne’s disease (JD), as a cause of Crohn’s disease (CD):

MAP is a zoonotic infectious disease that has spilled over from animals to humans, just like COVID-19. It is not recognized as such for many reasons, one being antiquated ideas, and another being that its spread is measured in decades, not days. It is a stealthy pathogen that society must reckon with.

Concern for public health is just one of many reasons Johne’s disease must be controlled in animals.