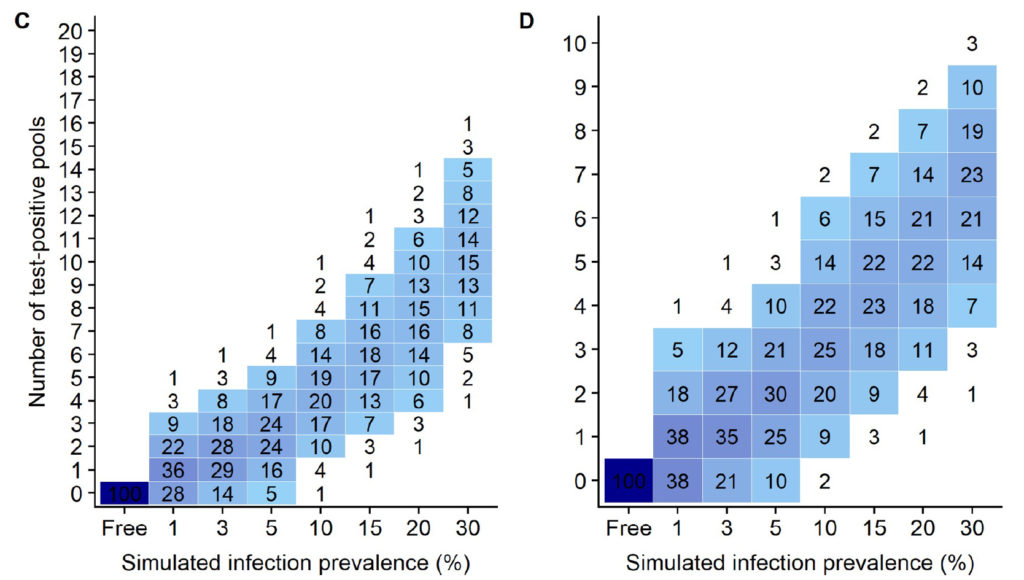 The aim of our study was to evaluate the flock sensitivity and specificity of fecal qPCR and serum ELISA using pooled samples for screening paratuberculosis in French sheep.

Using individual feces with low or high qPCR Ct values from ewes sampled in 14 infected flocks, a total of 555 pools of size 5, 10 and 20 were created by diluting individual materials in negative feces and analysed using a commercial IS900 qPCR kit. The relative performances of pooled serum ELISA analysis were evaluated based on the analysis of 181 different pools of size 5 and 10, composed of individual serum samples of various individual S/P values. Results showed that for pools of size 5, 10 or 20, individual fecal samples with low Ct values were invariably detected. Conversely fecal samples with high Ct values were associated with a lower detection rate in both pools of size 5 (87.0% to 90.0%), 10 (63.0% to 70.7%) and 20 (46.7% to 60.0%). After lowering the decision threshold to 25% and 15% for serum pools of size 5 and 10 respectively, the pooled serum ELISA relative sensitivity ranged between 62.2% and 100.0% depending on the composition of the pools.

Finally, a simulation study was carried out to evaluate the performances of 16 screening strategies at flock level, with varying pool size (5 to 20) and number (5 to 60). The use of pooled serum ELISA led to very false positive detection rate ranging between 37.6% and 91.8% in paratuberculosis free flocks and prevents its further use in that context. For infection prevalence ≤ 5%, the flock sensitivity based on pooled fecal qPCR ranged between 39.0% (5 pools of size 10) and 99.9% (300 sampled individuals, with pools of size 5,10 or20), and was always above 93% when the infection prevalence was greater or equal to 15%. We conclude that pooled-fecal qPCR but not pooled-serum ELISA could be a useful tool to detect sheep flocks infected with paratuberculosis.

Comment: The authors focused their discussion on diagnostic tests useful for screening of sheep flocks for ovine Johne’s disease (OJD) where the primary goal is to detect MAP-infected flocks, i.e. maximize “flock sensitivity” and “flock specificity”, at the least cost. This should not be confused with the use of fecal pooling strategies for qPCR testing in known infected flocks where the goal is to identify individuals in the flock that should be culled or isolated.

In MAP-infected flocks there are two equally important goals: 1) to limit the cost of testing the whole flock, and 2) to limit the cost of testing the individual samples, i.e. to have the fewest number of qPCR-positive pools. This second goal is important because each of the fecal samples comprising a qPCR-positive pool must be individually tested by qPCR in order to identify each MAP-infected sheep adding significant costs, e.g. roughly $30 x 5 = $150 per PCR-positive pool (based on WVDL testing rates).

Using the simulation data from this publication (shown above), for flocks with a MAP infection prevalence of 10%, the simulation data (Fig 4 C & D in the publication as shown above) indicate that using 20 pools of 5 fecals/pool, 93% of flocks would have 7 or fewer positive pools which would then cost an additional $1,050 to test each fecal individually by qPCR (7 pools x 5 fecals/pool x $30/qPCR = $1,050). By contrast, if these same flocks used 10 pools of 10 fecals/pool, then 92% of flocks would have 5 or fewer qPCR-positive pools resulting in a cost of $1,500 to individually test the fecal samples making up those pools (5 pools x 10 fecals/pool x $30 = $1,500).

These findings are based on a simulation of random pooling of fecal samples described in the publication. As mentioned in a previous news posting, strategic pooling by animal age can help limit the number of test-positive pools Kalis (2000). This is because animals of similar age experienced similar risks of becoming MAP-infected when young. Thus, age-based pooling (strategic) results in more MAP-infected animals likely to be in the same pool and conversely the fewest number of positive pools for the flock or herd as a whole.

You can read more about a clustering of MAP-infections by age and season in the publication by Zare et al. titled: Evidence of birth seasonality and clustering of Mycobacterium avium subspecies paratuberculosis infection in US dairy herds. Preventive Veterinary Medicine 112: 276– 284, 2013. However, the clustering effect may not be as pronounced for sheep which do not have lambs thought the year.

In closing, this discussion highlights the importance of utility analysis when judging the merits of diagnostic tests for MAP. For more on this topic see Garder et al. Consensus-based reporting standards for diagnostic test accuracy studies for paratuberculosis in ruminants. Preventive Veterinary Medicine 101: 18-34, 2011.