This is the title of a news item and editorial in Gastroenterology & Endoscopy News, March 10, 2020.  This news item is important as it draws more attention from gastroenterologists to the very positive results of the RedHill Biopharma trial: results that have been previously discussed on this website. The key findings are again shown below which demonstrate that a combination of three antibiotics has significant therapeutic benefit to patients with Crohn’s disease. 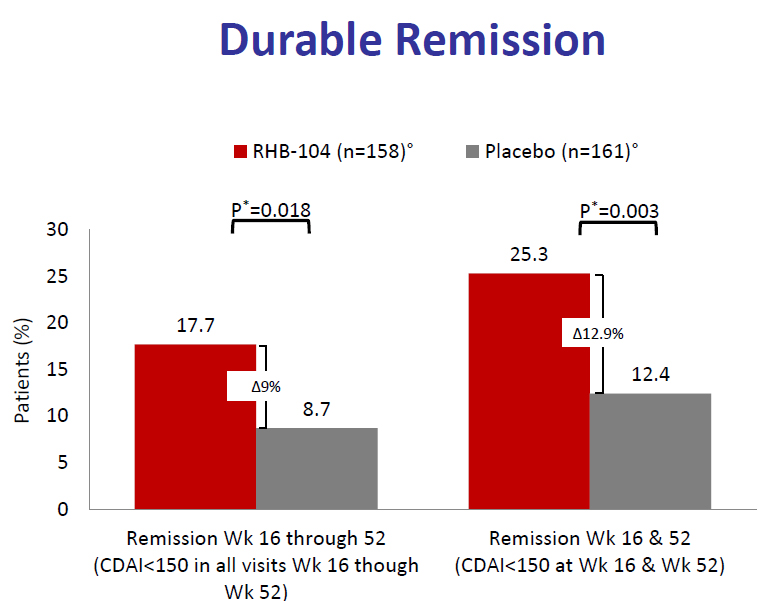 What is troubling about this news posting are two concluding paragraphs quoted here:

David T. Rubin, MD, the section chief of Gastroenterology, Hepatology and Nutrition at the University of Chicago, called the data potentially “important,” but he emphasized that “we must adhere to Koch’s postulates” before drawing conclusions about the role of specific bacteria as causative agents in Crohn’s disease.

These postulates include proving the presence of the bacterium in every case of the disease and reproducing the disease when a culture of the bacteria is inoculated in a healthy host. No data of this kind—or even findings demonstrating MAP infection among enrolled patients—were presented, Dr. Rubin said.

First, Koch’s Postulates are antiquated and many of today’s diseases cannot fulfill these simple criteria for causation developed in the early 1900s.  I urge Dr. Rubin and others to read this book: Causation and Disease: A Chronological Journey by Alfred S. Evans (here’s a link to the book on Amazon). There are many examples of infectious diseases for which science cannot fulfill Koch’s Postulates and yet they are well-accepted causes of disease.

One of the best examples, pointed out by Dr. Robert Greenstein (Lancet Infectious Diseases, 2003), is the disease leprosy. We accept that Mycobacterium leprae is the cause of leprosy and yet no laboratory has ever cultured the bacterium in vitro. Read more on these Wikipedia pages about leprosy and about Hansen, the man most often credited with discovering the cause of leprosy (also called Hansen’s disease) in 1873; a man whose career was destroyed after he tried to infect a human without her consent.

Bradford Hill Criteria for causality are a more contemporary framework for deciding if a specific infectious agent causes a disease. Dr. R.J. Chiodini, the first person to culture MAP from Crohn’s patients (Chiodini et al, 1984) judged that MAP fulfilled 8 of the 10 criteria for causality as defined by Bradford, Hill and others (Chiodini et al., 2012).

Here’s a short list of published findings implicating MAP, the accepted cause of Johne’s disease (JD), as a cause of Crohn’s disease (CD) and thus warranting a designation of MAP as a zoonotic pathogen:

The header on the website of Lancet Infectious Disease today states:

With the increasing frequency of zoonotic spill overs leading to human infections and transmission, it’s apparent that pandemic preparedness has become a priority for the global health agenda.

Many experts agree that MAP is a zoonotic infectious disease that is spilling over from animals to humans, just like COVID-19. It is not recognized as such for many reasons, one being comments like that of Dr. Rubin, and another being that its spread is measured in decades, not days. It is a stealthy pathogen that society must reckon with.

Read more about the zoonotic potential of MAP on this page of our website.