This year the laboratory of Dr. Adel Talaat, School of Veterinary Medicine, University of Wisconsin-Madison, has reported on two unique vaccines to combat Johne’s disease. The first, a nanovaccine, was reported in npj Vaccines February 14, 2020. The second, a live attenuated (avirulent) vaccine (LAV) was reported in the journal Microorganisms September 17, 2020. Both  publications describing these vaccines are Open Access.

Mycobacterium avium subsp. paratuberculosis (M. paratuberculosis) causes Johne’s disease in ruminants and is characterized by chronic gastroenteritis leading to heavy economic losses to the dairy industry worldwide. The currently available vaccine (inactivated bacterin in oil base) is not effective in preventing pathogen shedding and is rarely used to control Johne’s disease in dairy herds. To develop a better vaccine that can prevent the spread of Johne’s disease, we utilized polyanhydride nanoparticles (PAN) to encapsulate mycobacterial antigens composed of whole cell lysate (PAN-Lysate) and culture filtrate (PAN-Cf) of M. paratuberculosis. These nanoparticle-based vaccines (i.e., nanovaccines) were well tolerated in mice causing no inflammatory lesions at the site of injection. Immunological assays demonstrated a substantial increase in the levels of antigen-specific T cell responses post-vaccination in the PAN-Cf vaccinated group as indicated by high percentages of triple cytokine (IFN-γ, IL-2, TNF-α) producing CD8+ T cells. Following challenge, animals vaccinated with PAN-Cf continued to produce significant levels of double (IFN-γ, TNF-α) and single cytokine (IFN-γ) secreting CD8+ T cells compared with animals vaccinated with an inactivated vaccine. A significant reduction in bacterial load was observed in multiple organs of animals vaccinated with PAN-Cf, which is a clear indication of protection. Overall, the use of polyanhydride nanovaccines resulted in development of protective and sustained immunity against Johne’s disease, an approach that could be applied to counter other intracellular pathogens.

A protective vaccine against Johne’s disease in cattle

Johne’s disease (JD) caused by Mycobacterium avium subsp. paratuberculosis (M. paratuberculosis) is a chronic infection characterized by the development of granulomatous enteritis in wild and domesticated ruminants. It is one of the most significant livestock diseases not only in the USA but also globally, accounting for USD 200–500 million losses annually for the USA alone with potential link to cases of Crohn’s disease in humans. Developing safe and protective vaccines is of a paramount importance for JD control in dairy cows. The current study evaluated the safety, immunity and protective efficacy of a novel live attenuated vaccine (LAV) candidate with and without an adjuvant in comparison to an inactivated vaccine. Results indicated that the LAV, irrespective of the adjuvant presence, induced robust T cell immune responses indicated by proinflammatory cytokine production such as IFN-, IFN-_, TNF-_ and IL-17 as well as strong response to intradermal skin test against paratuberculosis antigens. Furthermore, the LAV was safe with minimal tissue pathology. Finally, calves vaccinated with adjuvanted LAV did not shed M. paratuberculosis post-challenge, a much-desired characteristic of an effective vaccine against JD. Together, this data suggests a strong potential of testing LAV in field trials to curb JD in dairy herds.

The LAV is among the first live vaccine to be tested in mice, then goats and now finally in this report, cattle. The early evidence suggests it will be a useful tool in the global effort to control Johne’s disease. However, assuming a company licenses one of the vaccines it will take several years to bring it to market.

The LAV did not produce the unsightly granulomas of traditional killed vaccines like Mycopar™. Below is the lesion score data from the LAV publication followed by a photo of a cow in Wisconsin vaccinated with Mycopar™ when she was just a calf. Regulations require that the Mycopar™ vaccine be administered in the brisket before the animal is 35 days old. The Mycopar™ vaccine is no longer being produced in the U.S. 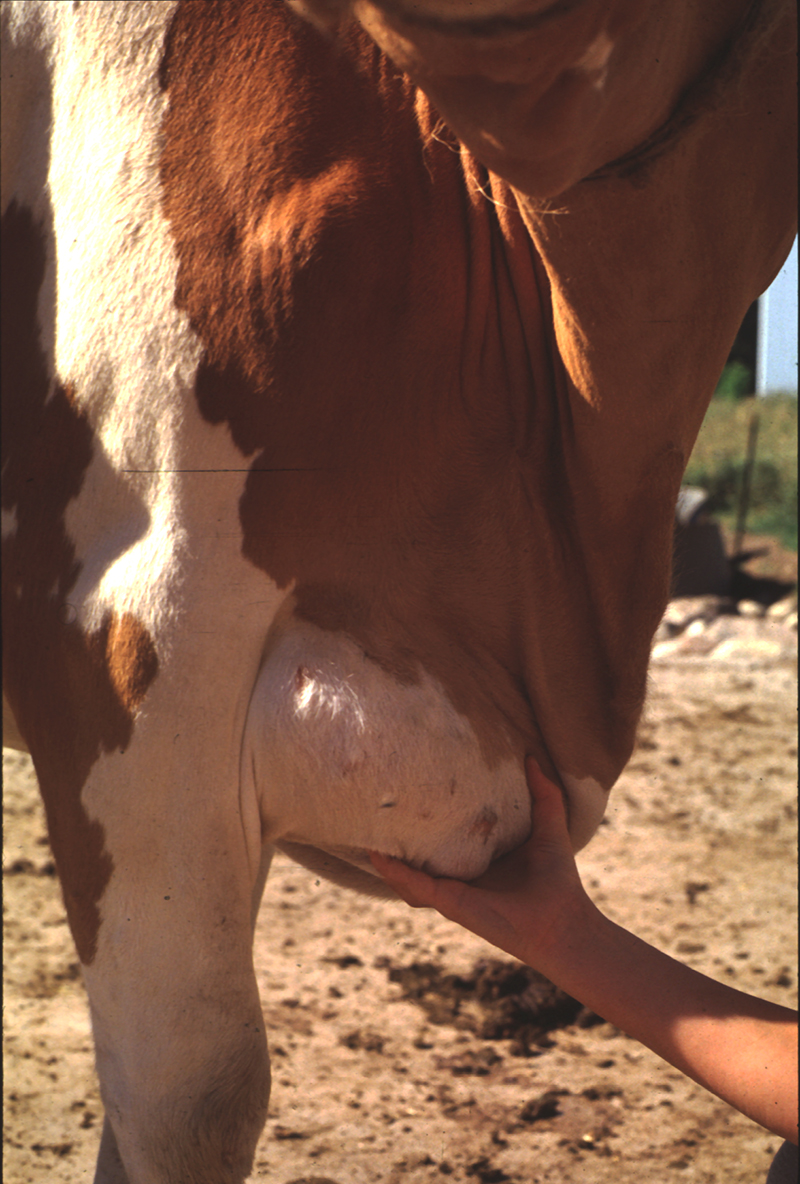 In countries with bovine tuberculosis (TB), caused by Mycobacterium bovis, it is vital that animals that are vaccinated against JD can be discriminated from those with bovine TB. In the study on the LAV, the authors reported:

Mycopar™ vaccinated calves displayed significant skin indurations after the injection of M. bovis PPD clearly showing cross-reactivity to bovine TB. On the other hand, none of the LAV vaccinated calves developed significant skin indurations against M. bovis PPD at 12 MPC, despite mounting a robust reaction to Johnin. In fact, pgsNQ vaccinated calves did not respond to the M. bovis PPD at the 2 MPV time point, as well. This lack of reactivity to bovine PPD feature, could be crucial for further developing the LAVs used here as DIVA compliant vaccines (vaccines with a simple assay to differentiate infected from vaccinated animals). The DIVA-compliant vaccines would be very useful to implement to control paratuberculosis in countries where bovine tuberculosis is prevalent and farmers hesitate to use the current JD vaccine. The observed cross reactivity to M. avium PPD by calves from all vaccine groups is expected because of the close similarity between M. avium and M. paratuberculosis but could be employed as a further confirmation of developing immunity against paratuberculosis.